New beginnings with Habitat for Humanity

Raymond James partners with Habitat for Humanity to empower individuals and families throughout their homeownership journeys. 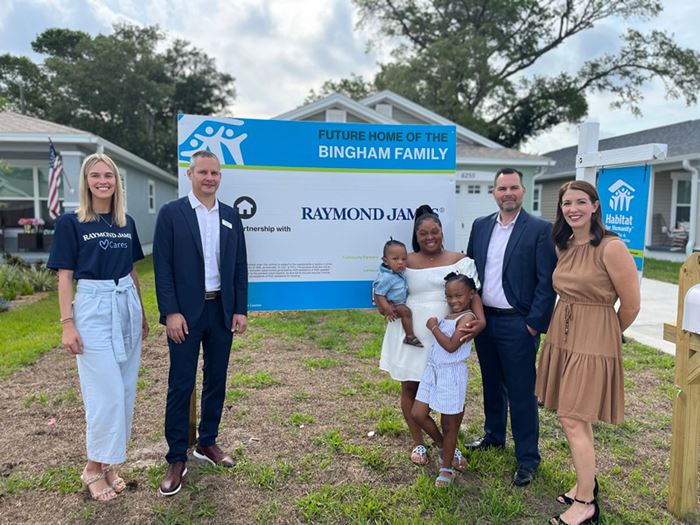 Receiving the news that she was accepted into the Habitat for Humanity program filled Desheka Bingham, a certified nursing assistant and mother of two, with joy and hope.

“I want a better life for me and my children now and in our future,” Desheka said. “[I am excited about] creating generational wealth and being able to pass something down to my children.”

After weeks of hard work by Desheka and Raymond James volunteers, the Bingham family received the keys to their new home.

Habitat for Humanity and Raymond James

For more than 20 years, Raymond James has partnered with Habitat for Humanity chapters across the country. As part of this commitment, the firm has sponsored 12 full home builds for Habitat for Humanity of Pinellas & West Pasco Counties. Habitat empowers individuals and families to build and buy their own homes with the help of people in the community. Homes are sold at cost and financed with zero-interest loans to families who may not qualify for a traditional mortgage. The program prepares homeowner partners with educational courses on topics like budgeting and home maintenance.

“I was thankful that someone saw me as being fit for something good,” Desheka said upon learning of her acceptance into the homeowner program. “I finally felt like my goals were moving along and that my prayers were answered.” 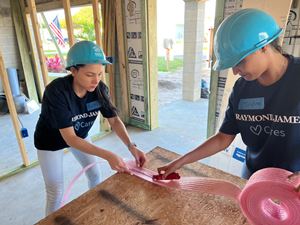 Raymond James is proud to have donated nearly 7,000 volunteer hours over the course of our partnership with Habitat, helping more than 40 families become home owners.

Additionally, Raymond James Bank has supported Habitat over the last decade through volunteerism and loan purchasing. To date, the bank has purchased 342 loans at $52.27 million in value.

“Volunteering is far and away the most rewarding part of my involvement,” Raymond James Bank Chief Financial Officer and Habitat Board Member Ken Ginel said. “I love being able to put in sweat equity right alongside the homeowners.” 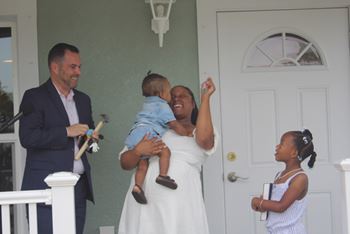 On May 19, 2022, after completing 20 homebuyer education courses and hundreds of hours of work on her home, Desheka Bingham gathered with her friends, family, Raymond James associates, Habitat staff and Pinellas County community members to celebrate a new beginning.

“At Raymond James, over the last six decades, we’ve focused on giving back to the communities where we live and work,” Raymond James Head of Supervision Chris Majeski said before handing Desheka the keys to her home. “And I have one ask: Every time you use that key, remember how many people are in your corner, who are here to support you, and are excited about your journey.”

The Bingham family’s home was the last house built on a street fully comprised of Habitat homes, completing a community of proud first-time homeowners.

In 2021, Habitat invited Raymond James volunteers to participate in the outdoor, COVID-safe portions of our sponsored build benefiting Brenda Graham and her four children. “I imagine our lives and future will be so much better now that we have our own home, and I will be able to give something so sentimental to my children,” Brenda said. Despite the challenges presented by COVID-19, nearly 30 volunteers were able to serve more than 180 collective hours completing the outdoor aspects of the home.

In 2020, Raymond James celebrated our 10th Habitat home sponsorship, which benefited Priscilla Trauger and her two daughters. After completing more than 350 hours of work on their home and others, Priscilla and her daughters moved into a community with 15 other Habitat for Humanity homeowners. “My daughters are my life. What I look forward to the most is spending time with them. We’ve learned so much from this new experience,” Priscilla said.

In 2019, 87 associates volunteered nearly 600 total hours on the Mickelson family’s home. Katherine Mickelson and her daughter were living in a small one-bedroom apartment when they were accepted into the homeownership program. “I am most looking forward to watching Camila decorate her room and invite her friends over to play,” Katherine said. “I know that one day she will be the owner of our house and she won’t have to go through the difficulties I did to get here.”