About Us Leadership Team Thomas A. James 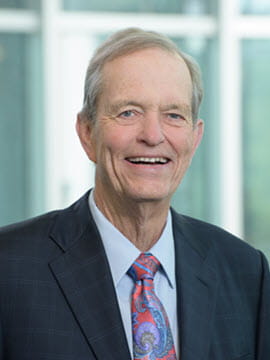 Thomas A. James is Chairman Emeritus of Raymond James Financial, Inc.’s (NYSE: RJF) Board of Directors and a current member of the Board. He was previously CEO and Chairman of the Board for more than 40 years before handing over those roles to Paul Reilly in 2010 and 2017, respectively. From 2010 to 2017, he served as Executive Chairman of the Board. He also is Chairman of subsidiary broker/dealer Raymond James & Associates, Inc., (member New York Stock Exchange/SIPC) and affiliate Eagle Asset Management.  He is still working full time.

Mr. James has previously served on the boards of numerous public companies.  In addition, Mr. James is the past chairman of The Financial Services Roundtable, the Securities Industry Association (now SIFMA, 1992), the Southern District of the SIA, the District 7 Business Conduct Committee of the National Association of Securities Dealers, and a past president of the Florida Securities Dealers Association, as well as Raymond James Bank, FSB and Heritage Family of Funds (subsidiaries of Raymond James Financial, Inc.).

Mr. James is a member and past chairman of the Florida Council of 100.  He was president of the Salvador Dali Museum from 1994-2017 and remains a member of its Board of Trustees. He served on the Board of Dean’s Advisors at Harvard Business School for a number of years and is the chairman of the board of the Chi Chi Rodriguez Youth Foundation and the James Museum of Western and Wildlife Art, which he and his wife, Mary, had designed, built and gifted for the benefit of the community.  He is also a past chairman of the Florida Council of Economic Education.  Mr. James has been an active participant with United Way of Tampa Bay, as a member of the board of directors, campaign chair and as founding chairman of the organization’s Alexis de Tocqueville Society in 1987.  He is a past member of the board of Junior Achievement of Pinellas County and has served as Commodore of the Treasure Island Tennis & Yacht Club.

Mr. James has received numerous awards and honors for his industry leadership, support of the arts, philanthropic activities and community service. His interests include tennis, golf and art collecting, particularly art of the Southwestern United States.

Certified Financial Planner Board of Standards Inc. owns the certification marks CFP®, CERTIFIED FINANCIAL PLANNER® and CFP® in the U.S., which it awards to individuals who successfully complete CFP Board’s initial and ongoing certification requirements.