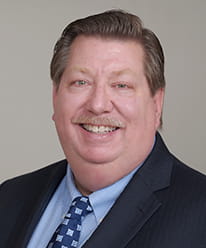 For more than two decades, Chris has been advising clients not only on investing with an eye toward retirement, but also on devising distribution and income plans for those already in retirement. His interest in investing began at age 25 when his own advisor at the time showed him the difference rational, seasoned advice coupled with solid research made when investing in the unsteady market of 1987. It was this approach to investing that inspired Chris to want to help others, and it’s why Chris chose to join Raymond James – with its conservative reputation among firms, awardwinning independent research, and the freedom Raymond James gives Chris to find the right investments for his clients.

Chris began his career in the financial industry with Edward Jones Investments and became a limited partner in the firm in 1998. In 2014, he joined Raymond James. To earn the Accredited Asset Management SpecialistSM designation he now holds, Chris completed a rigorous course of study. He passed an examination that demonstrated his ability to synthesize complex subjects and apply theoretical concepts to real-life financial situations, and he agreed to adhere to standards of professional conduct.

With a personal motto of “sum tertius,” meaning, “I am third” – God is first, others are second and I am third – Chris’ dedication to serving others has always been evident in his life. At age 17, he enlisted in the Army Reserve and became the youngest graduate ever of the Army Air Assault School at the same age. Commissioned a lieutenant in the regular Army at age 19, he attended Airborne school at 21, and at age 25, he commanded a battery in Iraq and was awarded the Bronze Star for combat.

Chris was born in Albany, New York. Having earned a Regents Scholarship, he attended Siena College where he received a bachelor’s degree in political science. Today, Chris lives in Fork, Maryland, with his wife, Karen, and the couple’s two children. He enjoys gardening, music and travel. He is involved in Boy Scouts and serves as a coach for his boys’ soccer and baseball teams.