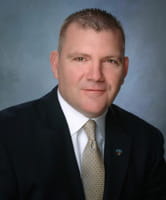 Paul is a Senior Vice President, Investments and leads the Raymond James branches of Northern Tampa Bay.  He is committed to fostering a supportive and professional environment that provides opportunity for advisors to grow freely.

Originally from Cape Cod, Paul attended The United States Military Academy at West Point and was commissioned in the US Army in 1991.  He and his wife Tracy moved to Naples, Florida after their time in the military and Paul began his career as a Financial Advisor with Prudential Securities in 2001.  Paul has earned the coveted CFP® designation from the Certified Financial Planner Board of Standards and the Chartered Financial Consultant (ChFC ®) designation from The American College.  He led the Wells Fargo Advisors branch in Pasco County from 2012 through 2018 prior to joining Raymond James in August 2018.

Paul is dedicated to his financial advisors, the growth of their practices, and the support of their clients.  He strives to build upon a supportive environment where Financial Advisors choose to work and call home.