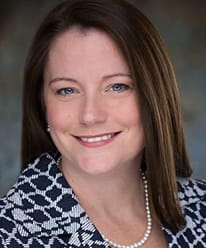 Lara M.S. Overy is the Commissioner of the Revenue for the City of Williamsburg. She was elected in November 2017 and began her 4 year term on January 1, 2018. In her short time as Commissioner of the Revenue, Lara has improved processes, implemented an audit program and increased compliance resulting in additional revenue for the City. Lara’s motto is to ensure all businesses are reporting accurately and being fairly taxed.

Lara has also served as Director of Development for Thomas Nelson Community College where she led the Development Team in securing public, private, corporate, and foundation funding. She also coordinated the fundraising efforts of the Educational Foundation and represented the interests of both the College and the Foundation to current and prospective donors.

In addition, Lara served as Executive Director of the Educational Foundation and Director of Development at Tidewater Community College where she successfully closed out The Campaign for TCC in 2011 with an historical final tally of almost $12 million, exceeding the original fundraising goal by nearly $2 million. After designing the program and hiring the staff, Lara's team exceeded its goals, raising $1.3 million and increased the number of donors to TCC by 67% in 2012 and 187% in 2013.

Lara brings not only education but experience from William and Mary. She served her alma mater as Reunion and Lead Annual Giving Officer, where she was heavily involved in identification and cultivation of prospects, donors, and alumni.

With nearly two decades of service in philanthropic community organizations, Lara currently serves as Secretary on the Colonial CASA Board and volunteers her time advising a number of non-profits on charity auction events. Lara also served as President of the Virginia Symphony Society of Greater Williamsburg and on the boards of the Girl Scout Council of Colonial Coast, the Virginia Symphony Orchestra Board, Young Life and the Greater Williamsburg Chamber and Tourism Alliance. For eight years Lara served as the Troop Leader for Girl Scout Troop 1377, which she founded. In addition to supporting the fundraising efforts of a broad spectrum of non-profit and community groups, Lara is a graduate of the 2015 Lead Peninsula program, a member of the Daughters of the American Revolution, a graduate of the James City County Citizen Leadership Academy, served as a Citizen Representative on the Regional Issues Committee appointed by the James City County Board of Supervisors and served many years on the board of Inclusion Inc., a Williamsburg non-profit benefiting children. Lara and her husband, Rick reside in Williamsburg with their daughters, Isabel and Madison and has a step-son, Cameron, who lives in London.