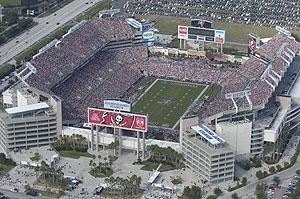 Known as the “crown jewel” of the National Football League, Raymond James Stadium® is the home of the NFL‘s Tampa Bay Buccaneers, University of South Florida Bulls football and the New Year‘s Day Outback Bowl, as well as concerts and special events. It was also host to Super Bowl XXXV in 2001 and Super Bowl XLIII in 2009.

Along with holding naming rights to the stadium, Raymond James serves as the Buccaneers‘ official investment services provider and also partners with the team on numerous community projects and initiatives. Examples include “Kicking for Kids,” which pairs financial gifts from Raymond James to a children‘s hospital in each NFL city where the Buccaneers kick field goals, and “Sack Hunger,” a program through which the Bucs, Raymond James and other local partners help stock Tampa Bay area food banks before the Thanksgiving holiday.

Click here to learn more about Raymond James Stadium and the firm‘s partnership with the Tampa Bay Buccaneers.