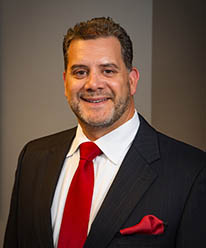 Eric Dupré is a recognized financial voice in the San Antonio community, having served as the investment professional on the KENS AM 1160 noon business program and appearing as a guest columnist in the Banking & Finance section of the San Antonio Business Journal.

His notoriety in the media, however, stems from Eric’s true professional passion – providing customized financial guidance for you. As the co-portfolio manager of the group, Eric is steadfast in his commitment to helping you pursue your financial goals as he follows in his father’s footsteps in the financial services industry.

Eric began his career in finance as an investment executive with Rauscher, Pierce, Refsnes. He later joined J.C. Bradford & Company as an investment broker and later served as a financial advisor for UBS, San Antonio. Then, in 2002, he became president of the Dupré Financial Group. In preparation for his career, Eric attended Boston College, where he earned a bachelor’s degree in general management. He later participated in the executive program on behavioral finance at the John F. Kennedy School of Government, Harvard University.

A native and current resident of San Antonio, Eric is in tune with the values of the community. He enjoys life here with his wife, Priscilla, and sons, Evan and Dylan, and is very active serving others. Eric is a board member of Las Casas Foundation, a member of the Texas Biomedical Research Institute Founder’s Council, a current member of Los Compadres de San Antonio Missions, and a past board member of the Baptist Health System Foundation, where he served as chairman of the Leaders Council.

The above organizations and/or charitable causes are not affiliated with Raymond James.