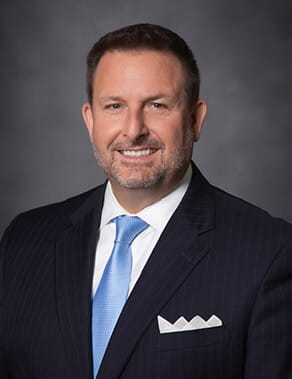 On a day-to-day basis, Michael leads his team in words and actions to support his vision of them being their clients’ most trusted advisors. He proactively communicates with those he serves by hosting frequent reviews to gain a better understanding of their short-term priorities – and to see how they’re progressing toward their long-term goals. Michael’s clients are diverse, with varying backgrounds and unique financial needs. For this reason, Michael and his team really listen to what is important to their clients so they can best understand what they want their wealth to do for them.

Michael’s main priority is to advise his clients in a way that helps maximize the life they want to live while utilizing the resources they currently have. He especially enjoys assisting his clients as they enter into a new stage of life. Michael specializes in working with individuals and business executives approaching and transitioning into retirement. Likewise, he deeply understands the concerns of business owners contemplating the sale of their closely held business.

Michael began his career in finance in 1996 as a traditional banker with Centura Bank, transitioning shortly thereafter to the role of financial advisor. He moved to Crestar/Suntrust Securities in 1998, serving there as a financial advisor until transitioning to Banc of America Investments in 2003. He then moved to Merrill Lynch after it was acquired by Bank of America in 2009. Michael decided to join Raymond James in 2019, drawn by the firm’s focus on putting clients first and providing him the autonomy to get the job done for those he serves.

Active in his community, Michael has served in various capacities with multiple Hampton Roads nonprofit organizations. Formerly, Michael served as chairperson for the Downtown Norfolk Council’s Downtown 100. He also served as past chair of the Norfolk division of the Hampton Roads chamber of commerce and is currently a regional trustee at the same organization. Michael is proud of being the past president of the Old Dominion University Alumni Association, as well as serving on its board for eight years. Michael currently serves as a director for the United Way of South Hampton Roads, the Business Consortium for Arts Support, the Downtown Norfolk Council and the Greater Norfolk Corporation.

Originally from Columbia, South Carolina, Michael has enjoyed being a Hampton Roads resident since 1984, when he began to attend Kellam High School. Go Knights! Michael and his wife, Stephanie, currently live in the West Ghent neighborhood of Norfolk, Virginia. The pair have two children, Samantha and Jake.

When he’s not at the office, Michael enjoys playing tennis, walking, and spending time with his wife. He also enjoys spending time at his children’s sporting events. He really appreciates having big family dinners on Sundays and winding down at his family’s place on the Outer Banks of North Carolina.