Skip to content
twitterfacebooklinkedin
Feel free to reach out.

Stock market returns for the S&P 500 (an index of large U.S. stocks) have been an interesting roller coaster over the last 30 years.

In the ten years ending December 1999, the index averaged an annualized 18.2%. That period ended with many tech and dot com companies seeing extremely high valuations and the day traders becoming a fad.

The following decade from January 2000 through December 2009 (known as the “Lost Decade”) generated a little different performance. The S&P 500 averaged a whopping negative 0.95% annualized return. For many investors, me included, that ten years felt like a VERY long period of time.

So, what’s in store for the next ten years? Unfortunately, we don’t have tomorrow’s newspaper. And even if we do have tomorrow’s news, it is still hard to predict how markets will respond. Who would have guessed that during a worldwide pandemic the market would be up 18.40% in 2020.

But are there some things we might learn from the Lost Decade?

Looking at the charts below, you can see that there was a real benefit for being diversified during those ten long years from 2000-2009. While the S&P 500 was down a cumulative -9.1%, other areas had a relatively good performance. And unsurprisingly, these areas that did well during the Lost Decade had underperformed the S&P 500 during the 1990’s. 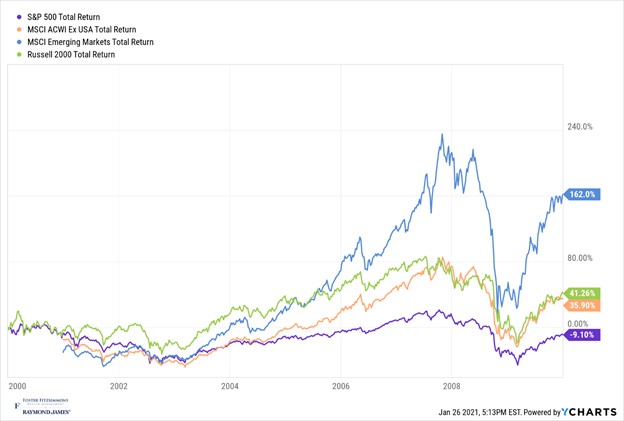 Turning to the most recent decade ending in 2019, you can see that markets flipped again, with the S&P 500 outperforming and international and emerging stocks significantly underperforming the S&P 500. Just the reverse of the previous decade. You could conclude that areas of the market that become popular and do well (i.e. become expensive) subsequently perform poorly, and what previously performed poorly (i.e. became cheap) perform well.

Unfortunately, the vast majority of investors invest based on past performance. They tend to buy what has gone up and sell what has either gone down or underperformed. There is no shortage of data provided by the mutual fund industry to confirm this.

A truly diversified portfolio owns all these market segments, as well as other assets such as bonds etc.

The downside of a diversified portfolio means you won’t own as much as you would like of the asset class that has been performing best recently. However, the upside is that when markets eventually favor other areas, you will be there also. And as the charts show, no one area stays at the top.

The impossible task of predicting when these turns will occur is one that tempts many investors. Our only thought to someone trying to do that is “good luck”. We believe that you have to be in all these markets, because no one is going to tell us when the turning points will occur.

This recent period is somewhat similar to the 1990’s when large U.S. stocks, particularly the large tech stocks, dominated stock market performance. Will this outperformance continue indefinitely? We don’t know, but history leads us to believe that it won’t. And again, that is why we own all segments of the market.

Hopefully this helps you understand why we advise you to invest your funds the way we do.

As always, please do not hesitate to call with any thoughts or questions.

Disclosure: Views expressed are not necessarily those of Raymond James & Associates and are subject to change without notice. Information provided is general in nature, and is not a complete statement of all information necessary for making an investment decision, and is not a recommendation or a solicitation to buy or sell any security. Past performance is not indicative of future results. There is no assurance these trends will continue or that forecasts mentioned will occur. Investing always involves risk and you may incur a profit or loss. No investment strategy can guarantee success. The S&P 500 is an unmanaged index of 500 widely held stocks that is generally considered representative of the U.S. stock market. The MSCI ACWI (All Country World Index) is a free float-adjusted market capitalization weighted index that is designed to measure the equity market performance of developed and emerging markets. As of June 2007 the MSCI ACWI consisted of 48 country indices comprising 23 developed and 25 emerging market country indices. The MSCI Emerging Markets is designed to measure equity market performance in 25 emerging market indices. The index's three largest industries are materials, energy, and banks. The Russell 2000 Index measures the performance of the 2,000 smallest companies in the Russell 3000 Index ( representing the largest U.S. companies based on total market capitalization), which represent approximately 8% of the total market capitalization of the Russell 3000 Index. It is not possible to invest directly in an index.

twitterfacebooklinkedin
Raymond James financial advisors may only conduct business with residents of the states and/or jurisdictions for which they are properly registered. Therefore, a response to a request for information may be delayed. Please note that not all of the investments and services mentioned are available in every state. Investors outside of the United States are subject to securities and tax regulations within their applicable jurisdictions that are not addressed on this site. Contact our office for information and availability.