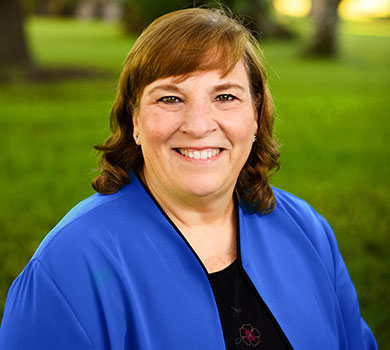 Lorraine moved from Georgia to Florida in 2018 to be closer to her mom and joined Four Pillars in 2020.

Prior to joining Four Pillars, Lorraine spent 15 years employed as a senior account administrator for a large trust company which provided custodial and trustee services for qualified and non-qualified retirement plans. Her clients were leading third-party administrators and recordkeepers. She is known for her high-quality customer service and going the extra mile for her clients.

Before staying put at the trust company for those years, Lorraine certainly led an exciting life living in many places across this wonderful country, including Washington D.C.; Lexington, Kentucky; New York, New York; Hollywood, California; and Atlanta, Georgia, just to name a few. There were many different jobs along the way, but she started her career when she was 18 working as a secretary for the FBI after they recruited her out of high school for being one of the best students. Some of her other jobs were recreation supervisor at The Grand Hotel on Mackinac Island in Michigan, office manager for a baseball card company, an administrative assistant in county government, and an advertising sales representative for a newspaper where she won awards for ad design. One of the big turning points in her life was joining The Weather Channel in affiliate sales and marketing. This is where she honed her skills in customer service, but also developed a desire to try acting for the first time and learn television production.

Lorraine took acting classes, worked on her craft and eventually started earning roles in community theater in Atlanta and New York City. While pursuing her new hobby, there was still a paycheck to be earned. She worked in television production covering the NFL for a TV network in London, England, assisted with casting movies, spent time as an administrative assistant at a boutique investment bank, and even drove a beverage cart on a golf course. From there, it was on to the bright lights of Hollywood to work for a very successful award-winning film and television producer.

She currently lives in Rotonda West and enjoys going to community theater and minor league baseball games. She loves visiting her family and friends around the country and playing some very competitive card games with them. Most importantly, she is a University of Kentucky Wildcat basketball fanatic!