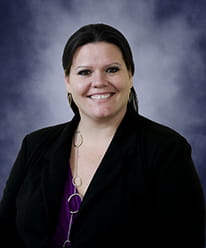 Christy Kirby was born in Terre Haute, Indiana before her family moved to the Sarasota, Florida area where she was raised as the youngest sibling with two older brothers. Growing up, Christy was drawn to theatre and stage work and for six years traveled throughout the United States as a member of an elite group of choir students.

Christy studied business communications at Warner University prior to owning and operating a family tile business in Myakka City. There she oversaw application, bidding and planning processes, as well as site installation.

Christy has a daughter, Emma, who is in middle school. Christy has held several leadership positions in her church, including Worship Leader, managing weekly performances by a 14-member band.

Christy joined Raymond James in 2013 as a Client Services Assistant. In her role she assists with client communication, marketing, planning and other administrative support. She is currently studying for her Series 7.