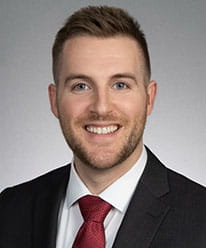 Before joining Raymond James, Erik began his career in 2014 with Merrill Lynch with a focus in financial planning. At Merrill Lynch Erik was a subject matter expert with their proprietary retirement analysis software and was also a specialist using the performance reporting and investment proposals. Erik’s keen interest in financial planning and expertise with financial reporting software led him down the path later becoming a Director of Financial Planning at Mass Mutual and an Associate Advisor at New York Life. Erik believes that the key to financial independence begins with first learning where one is currently at.

Erik is a CERTIFIED FINANCIAL PLANNER™ professional. This designation holds Erik to a high ethical standard to ensure all recommendations are in the client’s best interest and is a designation which requires completion of an approved education program, a board examination and experience requirements to hold the designation. Along with his CFP® designation, Erik holds the CRPS™ designation which is the Chartered Retirement Plan Specialist™. Along with his designations, Erik also holds the Series 7, Series 66 and the Life & Health Insurance license through the state of Virginia. Erik earned his bachelor’s degree in Finance with a minor in Economics from the Indiana University of Pennsylvania.

Originally from the Philadelphia area, Erik and his fiancé live in Loudoun County and in his free time he enjoys playing ice hockey, traveling and spending time with his friends and family. Given his relocation to the area in 2017, Erik is still actively exploring and learning everything that Virginia has to offer.