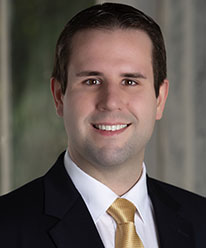 Benjamin T. Ridley was born in Waterville, Maine and grew up in Rome just north of the Belgrade Lakes region. Graduating from the University of Maine in 2008 with a B.A. in Public Administration he began work shortly thereafter at Boston Financial Data Services. It was during this time he was exposed to the world of financial investments and earned his American Society of Pension Professionals & Actuaries (ASPPA) certification.

It was during this period he discovered a passion for assisting clients with financial planning and education. With this in mind Benjamin made the transition to a client services role within the Mendall Financial team in 2012. Three years later he would earn his Series 7 license which is required for registered representatives working in the securities industry. Since then Benjamin has found it to be a rewarding and engaging experience working with the Mendall team as we help our clients work towards achieving their retirement goals.

Benjamin currently lives in Augusta with his wife Erin and their two young girls Vera and Brynn. In keeping with a family tradition for all males on his father’s side his middle name is True.