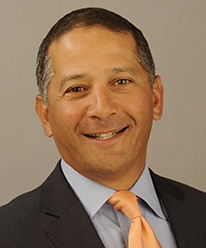 Few people understand the slow and steady approach to reaching a goal better than Paul. Over the course of more than 40 years, he has made his passion into a family business.

Like his brother Sam, Paul remembers the many long hours their father put into his financial practice after working a full day at school. His father’s determination inspired him to seek the kind of education that would best serve the family business.

Paul earned a Bachelor of Science degree in Mathematics and Finance from Albright College in 1988. In December 1991, he graduated with a Juris Doctor from the Dickinson School of Law and was admitted to the Pennsylvania Bar in the spring of 1992. In 1999, he added the CERTIFIED FINANCIAL PLANNER™ certification to his list of accomplishments, followed by a Certification in Long-Term Care in 2004. His latest certification came in September of 2016 earning the designation of Retirement Income Certified Professional®.

Paul began his advisory career at his father’s first firm, Wyomissing Financial Group, LLC, while attending law school. From there, he gained valuable industry insight working for a local law firm as an estate-planning attorney.

After leaving the legal profession, he worked on Wall Street as an assistant trader for an equity trading firm and then as an equity trader before rejoining his father’s practice in 1998. In 2001, he and his father launched Marrella Financial Group, LLC. Today, Paul, and his brother Sam work closely together to help clients reach goals and build legacies for their families.

Paul is an active member of the Wilson High School Scholarship Committee and the Berks County Basketball Old-Timers Association.

A sports fanatic, he is a youth coach for football, basketball, and lacrosse teams, an avid golfer, and a black belt in Ryukyu Hon Kenpo Kobujitsu style of Karate.

Paul, his wife, Tracy, and their children, Mackenzie and Matthew, live in Sinking Spring, Pennsylvania.