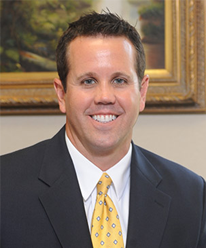 Bill is a graduate of Birmingham Southern College in Alabama and majored in Economics. While at BSC he played baseball and was inducted into the Sports Hall of Fame in 2002. After graduation, Bill signed a professional baseball contract with the Philadelphia Phillies. He worked during the off seasons at Smith Barney due to his long-term desire to professionally manage money. When he completed his baseball career in 1998, Bill joined Raymond James as a Financial Advisor. His hard work ethic earned him recognition within the Raymond James organization.  In 2004, he was asked and accepted the role of Branch Manager for the Vero Beach office. In 2008, Senior Management wanted to open a branch in Stuart, Florida. Bill was asked to start the branch and become its first Branch Manager. In 2014, Bill was recognized as a member of the Raymond James President’s Club*.

He believes that the most consistent investment results are attained through proper long-term asset allocation. “When you have worked hard to achieve success, you require financial advice that meets your highest level of professional and ethical standards. Our team is dedicated to meeting and exceeding those expectations.” Studies show, the two largest concerns investors face is their retirement income level and their healthcare costs. Bill uses bonds and other fixed income investments to help create a predictable income stream and help alleviate some of those concerns.

Bill is a Florida native and lives in Vero Beach with his wife Kim and their three children, Emma, Ty and Jace. He is an avid sports and a die-hard University of Florida Gator fan. In his spare time, he enjoys fishing, watching sports, coaching little-league baseball and boating with his family.

*Membership is based mainly on assets under management, education, credentials and fiscal year production. Re-qualification is required annually.The ranking may not be representative of any one client’s experience, is not an endorsement, and is not indicative of advisor’s future performance. No fee is paid in exchange for this award/rating.

Please keep in mind that diversification and asset allocation do not ensure a profit or protect against a loss.