The Federal Reserve Bank of New York released it Household Debt and Credit quarterly report last week and showed an increase in household debt levels. According to the report, household debt balances increased $351 billion during the third quarter of the year to $16.51 trillion or an increase of 2.2% compared to the second quarter of 2022. This means that debt balances have increased $2.36 trillion since the end of 2019, just before the Covid-19 recession.

Out of the $351 billion increase in consumer credit during the quarter, $282 billion were allocated to mortgages. Total mortgage debt increased to $11.67 trillion at the end of September of this year and up $1 trillion since last year. Home equity lines of credit (HELOC) increased by $3 billion to $322 billion while credit card balances increased $38 billion compared to the second quarter. On a year-earlier basis, credit card balances were up 15%, which the report indicated was the largest increase in more than 20 years.

Although the increase in credit card balances is worrisome, delinquency rates were down across the board with the exception of HELOC delinquency rates, which increased slightly during the quarter. Thus, the increase in credit card debt doesn’t seem to be a problem at this time and may be consistent with the state of the U.S. labor market, as households remain positive regarding the ability to find and/or keep their jobs today. Of course, this will change if the U.S. labor market turns negative but for now the expectation from households seem to support higher borrowing.

Employment, Productivity, and the Recovery from the Pandemic

The recovery from the Covid-19 recession has been very different for different sectors of the economy as the recovery in employment has not been homogeneous across these sectors while, at the same time, productivity has been relatively low over that time period.

We could point out to sectors that have outperformed and sectors that have underperformed during the recovery. First, we look at which sectors have recovered in terms of employment and what sectors have not. Second, we calculated a simple measure of labor productivity by sector, dividing real value added for each sector of the economy by the number of workers in that sector over time and since the period immediately before the Covid-19 recession.

The first measure shows that employment by sector has, for the most part, surpassed the levels of employment found just before the Covid-19 recession. Table 1, which is also a heat-map, shows all the sectors of the economy by levels of employment since before the Covid-19 recession and until the second quarter of this year. It is an index so any sector that has an index of 100 or more shows that the sector’s employment levels are either at the pre-pandemic levels or higher, respectively. Conversely, if the number is below 100, it means that the sector has not recovered yet.

It is clear that some sectors have stacked up on workers and thus are more prone to laying off workers faster if the economy continues to slowdown. This may be the case of the transportation and warehousing sector, whose level of employment is, today, 13% higher than the level that existed just before the pandemic. Meanwhile, the mining sector’s employment levels are 12% lower than those reached before the pandemic recession and thus it is possible that this sector will continue to add to its workforce.

Our next measure is a proxy for productivity in each one of these sectors. As we said before, it is estimated by taking the “real value added” for each sector of the economy divided by the number of workers in each sector. The table below shows another heat map index that measures our calculated productivity measure. 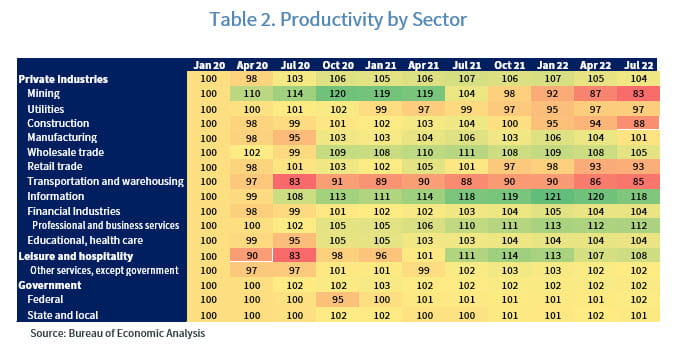 The mining sector seems to be a special case. As we mentioned before, the mining sector has very low levels of employment today compared the levels it had before the pandemic recession. However, at the same time, productivity is also very low today, but it was very high during 2020 and early 2021. Meanwhile, while the construction sector has more than recovered the levels of employment it had before the pandemic recession, its levels of productivity are very low today, which may indicate that the sector is primed for a relatively large correction if the housing market continues to deteriorate.