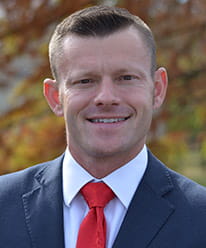 Alan graduated from Peebles High School as the class Valedictorian in 2003. He then attended Shawnee State University where he earned his Bachelor’s Degree.

After moving to Hillsboro and teaching for 1 year at Hillsboro Middle School, Alan earned his Master’s Degree from Xavier University. He was hired by the University of Cincinnati Department Of Athletics as the Compliance Assistant in October of 2010. Alan was promoted to Compliance Coordinator in July of 2011.

A strong background in athletics allowed Alan to enjoy his time in the Sports Industry. However, he soon realized that he had a passion for helping individuals with their most important financial goals. When the opportunity came to join the team of O’Dell Capital Management, Alan readily accepted. Alan is responsible for client goal planning and monitoring, the financial planning component of the firm.

Outside of the office Alan enjoys spending time with his wife, Sarah and his son Guyton. He also enjoys playing various sports, attending the YMCA, and is actively involved in his local church.