“What happens in 2021 depends on more than who wins the White House,” notes Chief Economist Scott Brown.

Many factors feed into the relative strength or weakness of the U.S. economy, but the president traditionally receives the credit or blame. Fiscal policy – taxes and gov­ernment spending – have an important role in economic activity, and confidence can drive consumer spending and business investment decisions. However, Congress controls the purse strings. The president does not have the ability to fine tune the economy, but whoever wins the White House will face a number of challenges in dealing with an ongoing pandemic and record levels of government borrowing and spending.

The cornerstone of the Trump administration’s economic pro­gram was the Tax Cuts and Jobs Act of 2017 (TCJA), which lowered the capital gains tax rate and reduced federal tax rates for most households and businesses, but also restricted deductions. The drop in the capital gains tax rate was meant to spur capital spending, but business borrowing costs were already low and firms were already generally flush with cash before it was signed into law. While some households paid less in taxes, the reduction in deductions meant that others paid more. GDP growth in the first three years under Trump was not much different than in the final four years under Obama. TCJA added substantially to the federal budget deficit, which exceeded $1 trillion in the 12 months prior to the pandemic.

Fiscal support to address the impact of extreme social distancing added further to the deficit, bringing the 12-month total to nearly $3 trillion in August. In any downturn, fiscal policy can play an important role in reducing the damage. Without it, temporary impacts can lead to more permanent damage. Businesses fail. Workers lose job skills. However, in applying fiscal support, there are always questions of how big it should be and how long it should last. Ideally, the degree and timing of support should depend on measures of job distress, such as the unemployment rate. How­ever, lawmakers have not been able to agree on that. 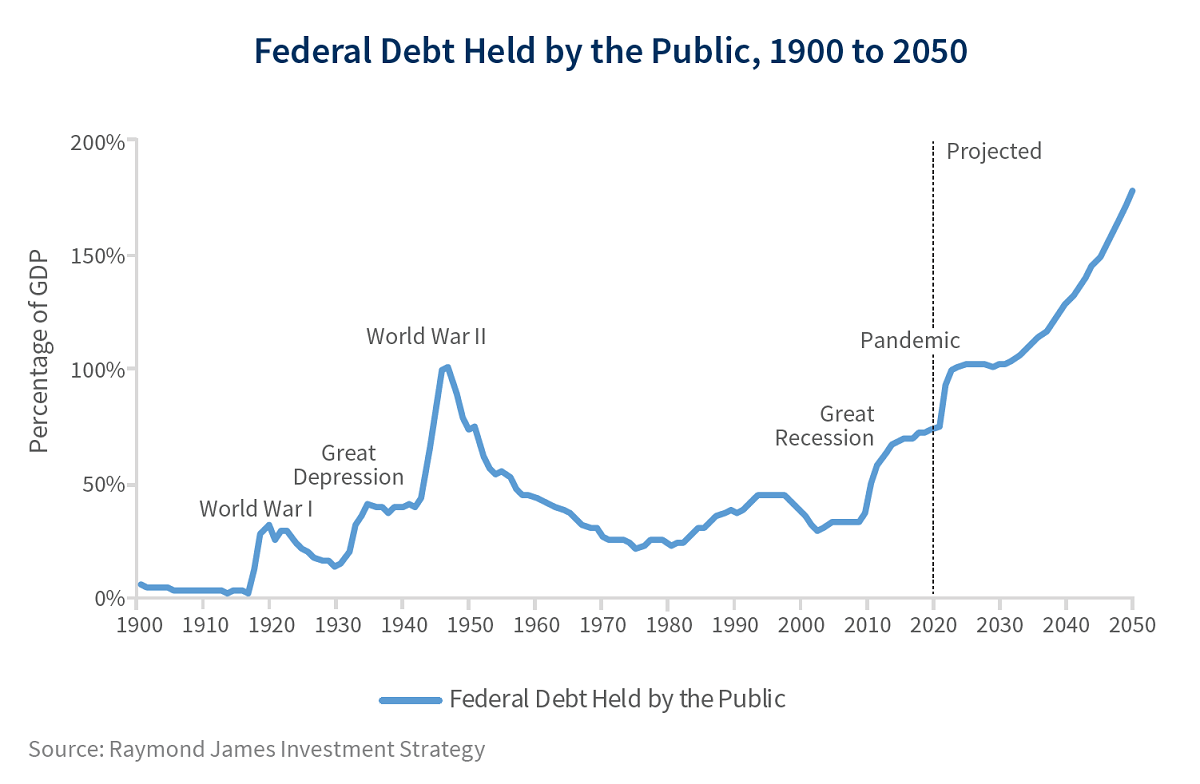 While the increase in government borrowing is worrisome to many, the real danger is not doing enough to support the economy in the near term and ending support too soon. The government is nothing like a household. The federal debt does not need to be paid off. The government has no problem borrowing. However, the federal budget was on an unsustainable track before the pandemic. The national debt was rising faster than nominal GDP. To get back on a sustainable trajectory, with debt rising no faster than GDP, we’ll need more tax revenue or less spending. These will be difficult choices. Prior to the COVID-19 pandemic, non-defense discre­tionary spending (which excludes Social Security, Medicare, defense, and interest rates) was just 2.8% of GDP.

Factors of the recovery

What happens in 2021 depends on more than who wins the White House. During the Clinton years, a divided government led to a budget surplus. Republicans didn’t get big tax cuts. Democrats didn’t get big spending increases. In contrast, in the current situa­tion, a divided government makes it harder to get things done. One party rule (the same party controlling the White House and both chambers of Congress) will most likely lead to higher taxes or cuts to entitlement programs, depending on the outcome.

The Federal Reserve will continue to do its part beyond November, keeping short-term interest rates low, through 2023. The Fed’s recent changes to its stated policy objectives had already been underway in practice over the last couple of years. Specifically, the adoption of a flexible average inflation targeting framework means that policymakers will allow inflation to exceed the 2% goal fol­lowing a period of inflation below 2%, but this will not be done in a mechanical way. Judgement will drive policy decisions.

The Fed’s employment goal has been made broad-based and inclu­sive. In a break from the past, the Fed will no longer raise short-term interest rates preemptively to fight inflation when the unemploy­ment rate is low. There is no specific target for the unemployment rate, as officials recognize that low unemployment substantially benefits low- and medium-income communities.

The pandemic now appears likely to be a more long-lasting eco­nomic event, requiring a restructuring of significant parts of the economy over the quarters ahead – and elevated job losses remain a key risk. While the Fed has been critical in providing liquidity, it can’t offset the economic impact of an ongoing pan­demic. Further fiscal support will be needed, regardless of the November outcome.

All expressions of opinion reflect the judgment of the author and are subject to change. Past performance may not be indicative of future results.