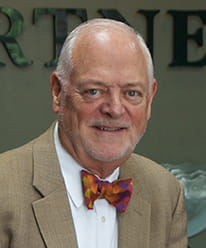 Carl earned his B.A. in Business Administration from Lenoir Rhyne University in Hickory, NC, and began his financial career in 1973 after returning from Naval service as a Weapons System Test Pilot. He became a Partner with J.C. Bradford & Co. which merged into UBS Financial Services in 2001. In 2006 he joined an independent practice, Resource Partners, LLC and Raymond James Financial Services.

With more than 42 years’ experience in financial planning and investment management Carl has the accumulated knowledge and perspective to help keep you and your financial future on a steady course. Carl understands the dynamics of wealth, how to balance the complex forces at work and how to adapt intelligently as conditions change.

Carl resides in Newton with his wife Sharon. He serves on the boards of the Historical Association of Catawba County and Montessori School at Sandy Ford. Away from the office he enjoys surf fishing, reading and playing music as a percussionist with several groups including the Carl Cline Trio.