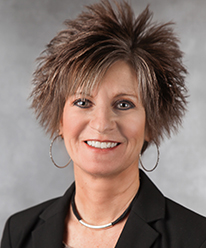 Lori has been a member of the Raymond James family since 1999. She started her career as Ray Jensen’s assistant in the Louisville branch of Raymond James, and along with Ray, moved to the current branch in 2010 where she became the branch’s Client Service Manager.

Previously, Lori spent time as a CSR with Citizens Bank and worked for the City of Louisville Finance Department.

Lori and Ray live in Lori’s hometown of Louisville where she enjoys taking classes at the YMCA, crocheting, and visiting local auctions and antique stores.

Lori’s twin daughters Abbey and Ashley and Ray’s children Meredith and Adam round out the family.