Big turnaround in the Fed's projected path for rates

Thus, we are changing our forecast for the US economy and now estimate that the US economy will probably face a shallow recession during 2023. That is, the probability of a recession in 2023 has increased to 60%. The timing of this recession will depend on how fast the Federal Reserve (Fed) increases the federal funds rate during the rest of this year but at this time, our estimation is for a recession to hit the US economy during the second and third quarter of 2023. Our new forecast for US economic growth in 2022 is 2.1% while our forecast for 2023 is now 0.5%. Thus, we expect this to be a shallow recession. That is, we don’t expect the recession in 2023 to be deep or long lasting so the economy should be growing again by the end of 2023.

Why Are We Making This Recession Call?

Two factors are contributing to our view. First, the Fed is not in control, currently, of the factors pushing inflation higher from the cost side, i.e., supply chain issues, Ukraine-Russia war, etc., so the only thing it can do is slowdown consumer demand in order to rein in inflation and inflation expectations.

Second, the only way it can slow consumer demand today is by slowing employment growth and wage growth even at the risk of pushing the economy into a recession. And, the only instrument in its control to do that is increasing interest rates. Some argue that this is the same as using a ‘sledgehammer’ to hammer in a tack, as higher interest rates affect highly sensitive sectors of the economy, like the housing market. This may be true, but the Fed cannot risk a continuous increase in inflation expectations or what it sees as expectations becoming unanchored.

Can the US Economy Avoid a Recession in 2023?

Yes, there is still a smaller probability (40%) where we see the US economy avoiding a recession in 2023. But the stakes are high currently. The Fed needs to see inflation, and particularly, longer-term inflation expectations, abate. Thus, the path of inflation during the second half of this year is the key for determining whether we can avoid a recession in 2023. If inflation starts to slow down in the second half of the year, then the Fed tightening campaign may also slow down and in the end the Fed may not need to go as high as what their “projected appropriate policy path” is today.

The race is on for the Fed to try to control inflationary expectations, so they don’t become entrenched (see our Weekly Economics for June 10, 2022). Consumers and businesses hold the key to whether this latest inflationary episode abates or lingers for a longer time, as happened back in the 1970s and early 1980s.

The concept of expectations seems a bit flimsy, to say the least. However, it is not. It is of utmost importance and the Fed knows this. If consumers and business expectations agree with what the Fed sees for the future, the Fed’s job becomes easier. However, if that is not the case, the Fed may have to push the economy into a deep recession in order to conquer those expectations the hard way. And the social and economic costs of doing that are great. Thus, the Fed will try to do whatever it takes for inflationary expectations to remain anchored.

Today, inflationary expectations are riding high, just as inflation is, and American businesses and consumers feel the pain of higher prices in all the things they do.

According to the University of Michigan Inflation Expectation Index, one year ahead inflation expectations have increased considerably, as shown in the graph below. 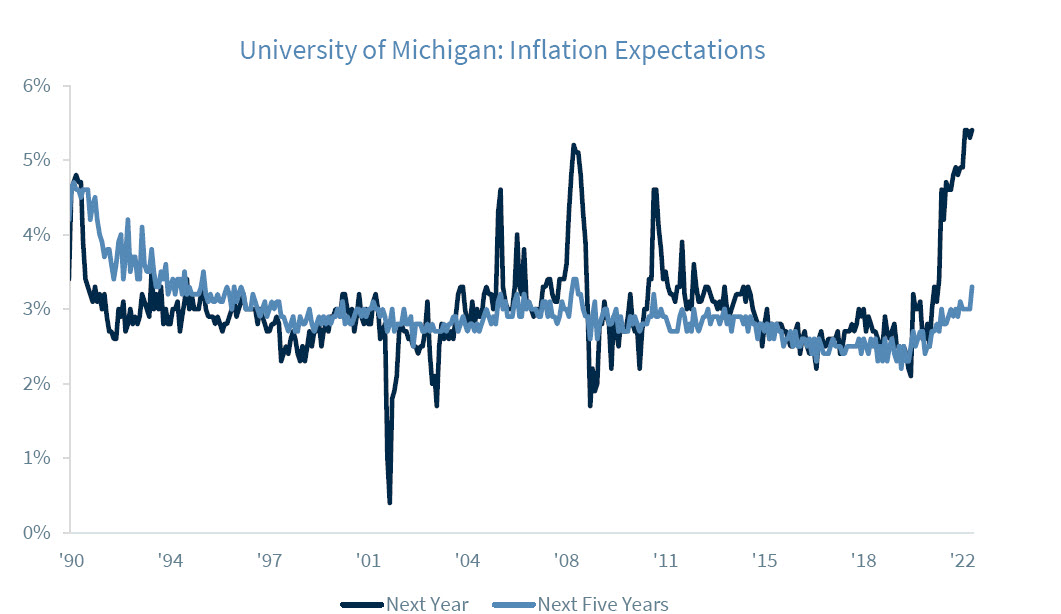 This is a clear signal that there are other factors affecting the price of gasoline that were not present in 2008 and whose control fall outside of the Fed’s sphere of influence. The war between Ukraine and Russia plus supply chain issues as well as low inventories, not only for petroleum but also for gasoline, fuel oil, and natural gas, etc. have been pushing prices much higher than they would otherwise be, putting further pressure on inflation. 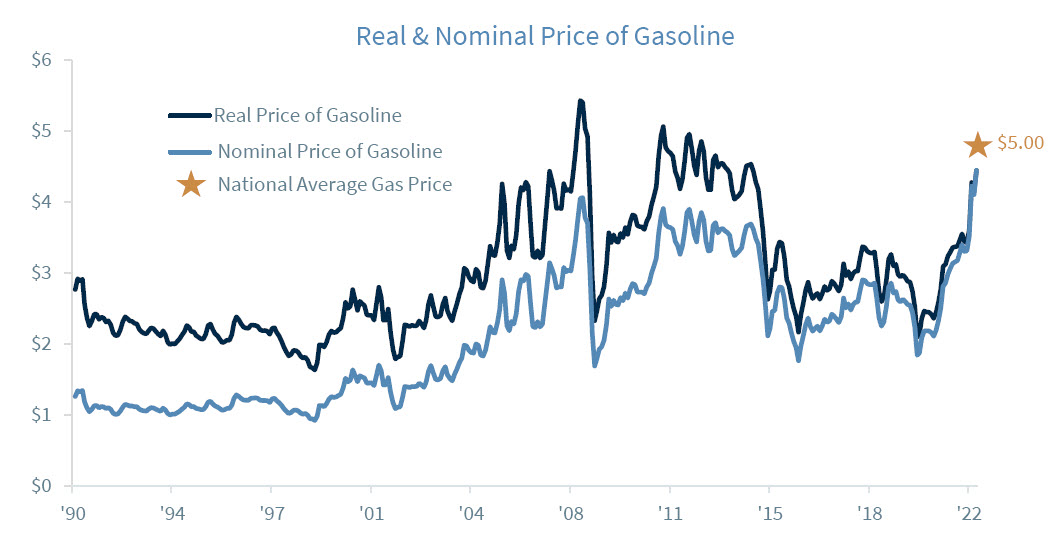 The similarities with the pre-Great Recession environment are not that many. Yes, we could argue that there is froth in the housing market today but the differences with the pre-2008 period are marked, and we do not expect something like the Great Recession to happen under current conditions.

Thus, we do not see a financial crisis as we saw during the Great Recession, and we also don’t see a deep recession affecting the US economy.