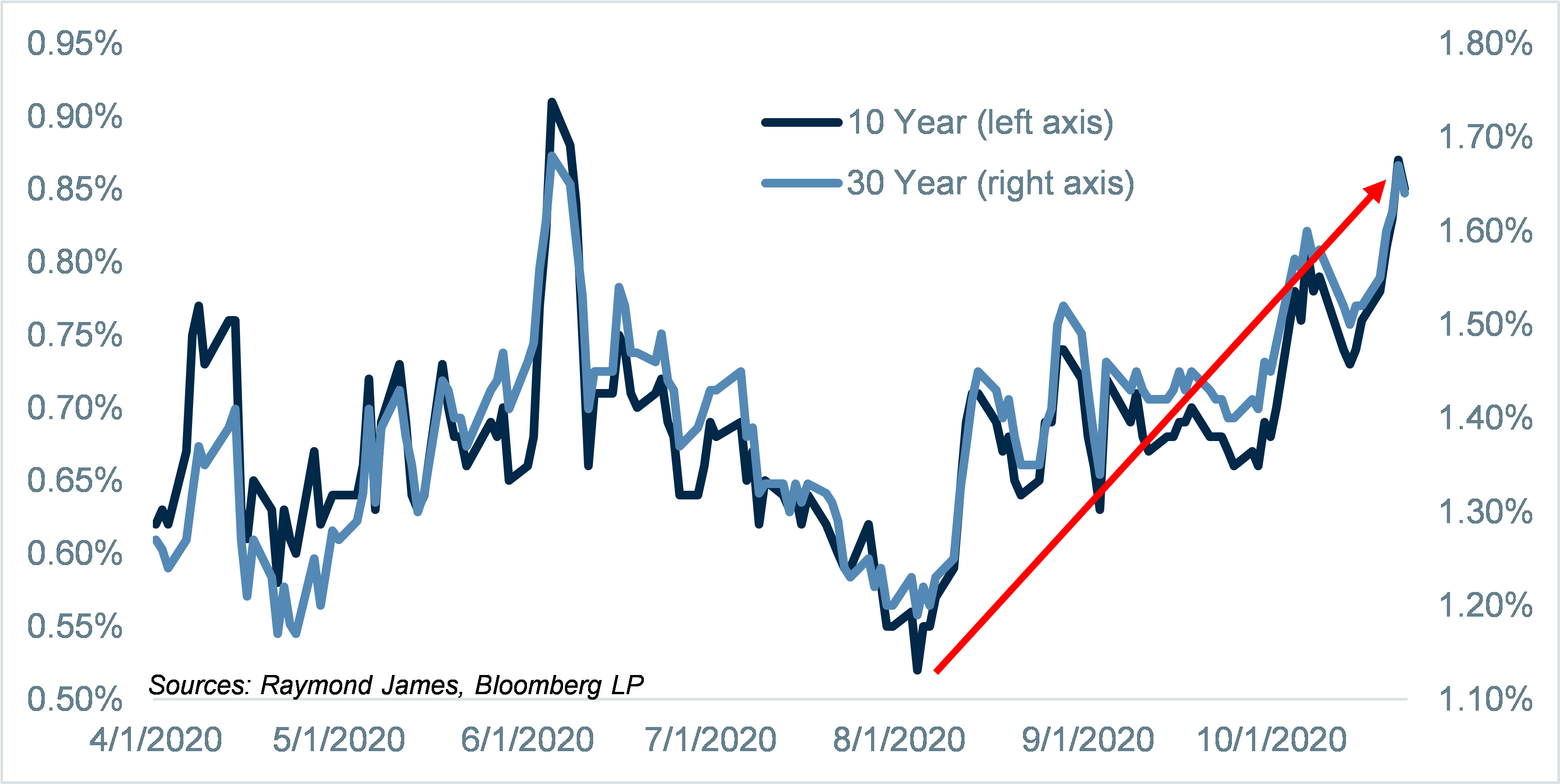 This graph shows 10 and 30 year Treasury yields since April, which is when the extreme market volatility that we experienced earlier in the year began to subside. Since the yields bottomed in early August, the overall trend has clearly been towards higher yields. Whether this is the start of a longer term trend or just a short-term move is up for debate, but the recent trend is clear.

While intermediate and long Treasury yields have been on the move, the short end of the curve has seen very little movement. Since the start of August, the 1-year Treasury has remained in a tight range of 12-15 basis points. This is not unexpected, as the FOMC has made clear their intention of keeping short-term yields low for the foreseeable future. The net effect of the FOMC’s hold on short-term yields and higher longer-term yields has been a steeper yield curve over the past few months, as highlighted in the chart above. A steeper yield curve presents an opportunity for investors, as it means more reward (yield) for extending out farther on the yield curve. As an example, as of Friday, the Bloomberg BBB Corporate Bond Index provided investors just over 1.00% in additional yield by extending from a 2-year bond to a 7-year bond. 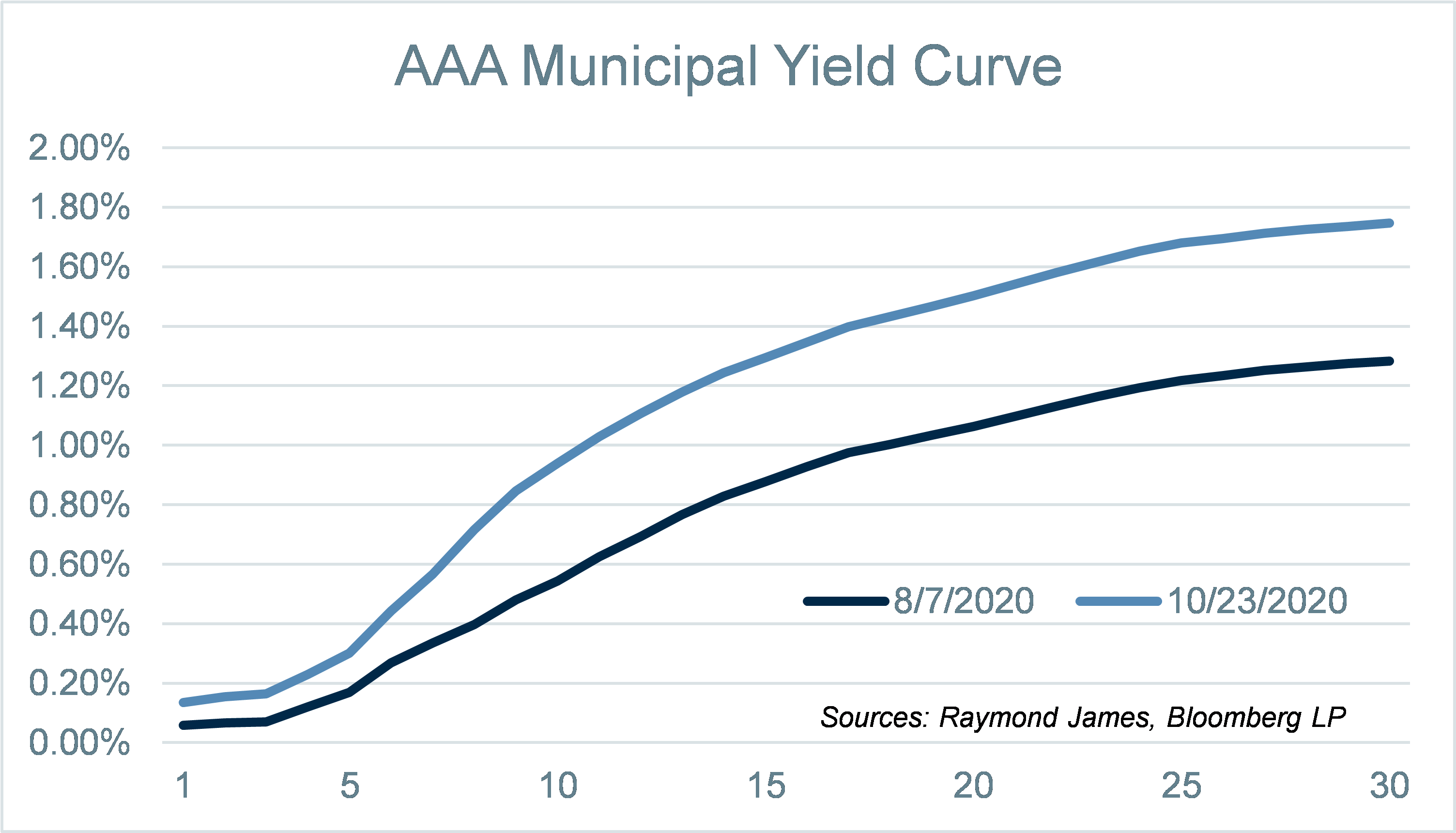 It took a little longer for the volatility in municipal bonds to subside compared to taxable bonds, but since late May, municipal yields have stabilized relative to the extreme movement experienced in March and April. Similar to the trend discussed above for Treasuries, municipal yields bottomed in early August and have been trending higher recently. In addition to higher yields, the municipal curve has also been steepening, with the slope (as measured by the 1 to 30 year spread) increasing from 122 to 161 basis points from August 7th to October 23rd (depicted on the graph above). 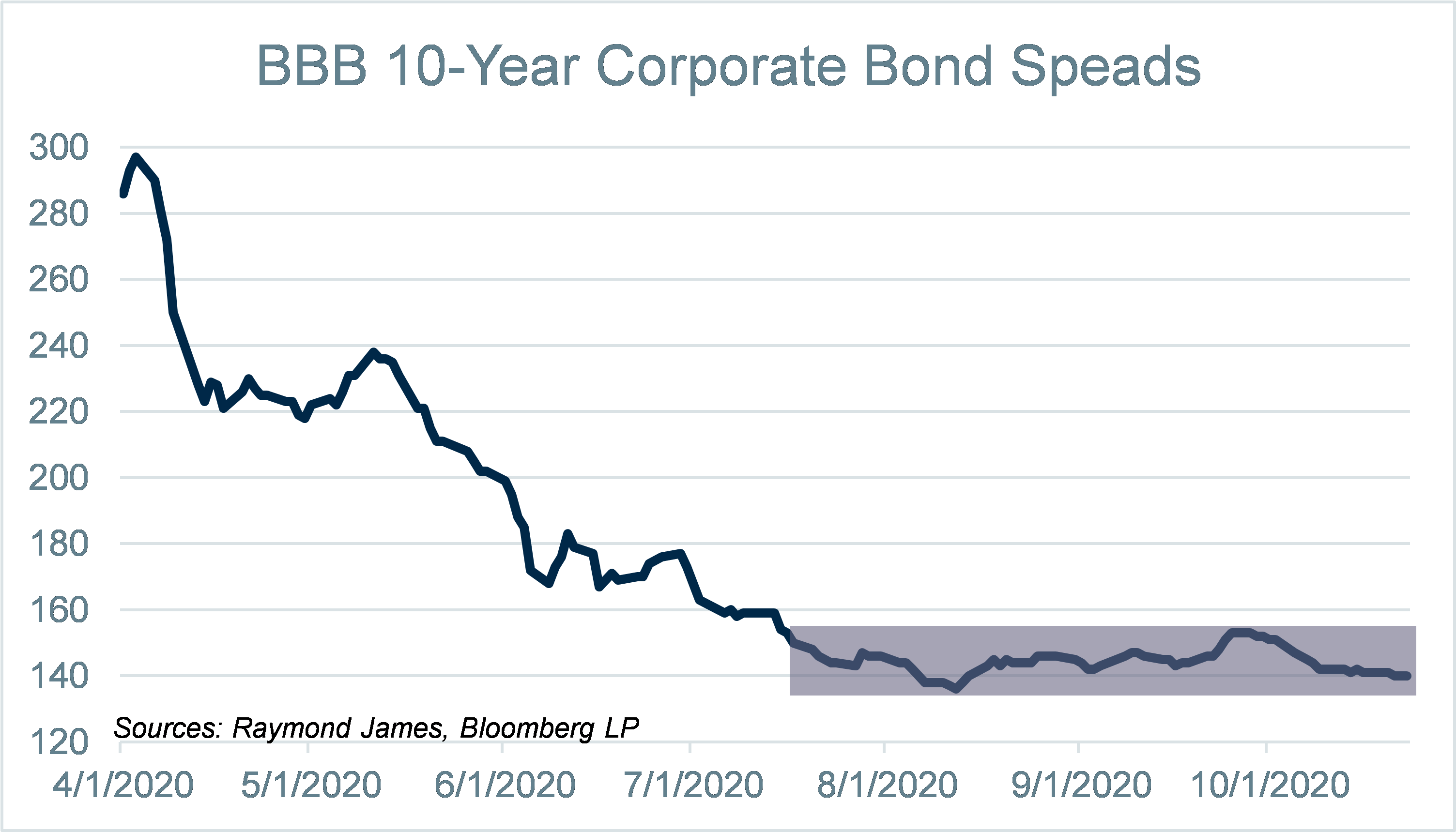 Massive fund outflows, among other factors, contributed to spread widening in the corporate bond market earlier this year. Spreads peaked in late March and drove steadily tighter through the end of July. Over the past few months, corporate spreads have been relatively stable, remaining in a fairly tight range as can be seen in the chart above. The stability in corporate bond spreads combined with the increases in Treasury yields over the past couple of months have led to higher corporate bond yields (a corporate bond’s yield is the corresponding Treasury’s yield plus the spread). The yield of the 10-year BBB corporate bond index has risen from a low of 1.92% in early August to 2.23% as of Friday’s close, an increase of over 30 basis points. As stated earlier, whether this increase in yields is permanent or temporary is yet to be determined, but for investors with money to put to work, the recent trends higher in yield could be the motivation enticing investors off the sidelines and back into the market.


“The more informed our clients become, the more confident they become with investing.”