The Role and Recognition of Investment Seasons 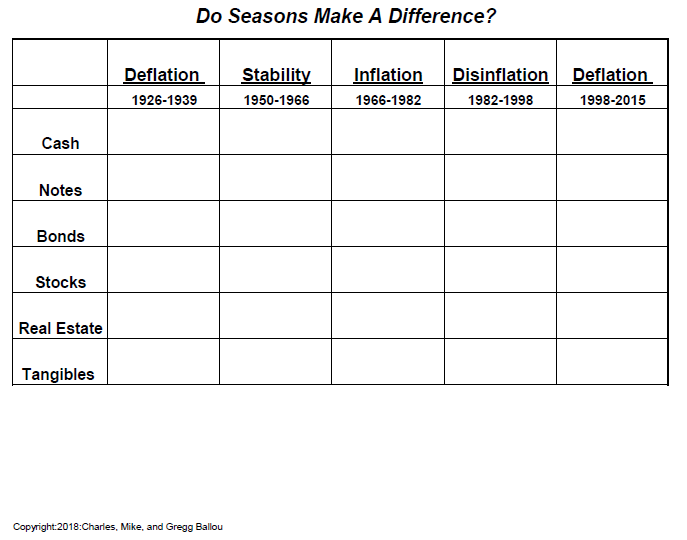 It was our recognition of investment seasons that has allowed us to develop forward looking financial expectation models that have proven meaningful.

Any student or observer of economics quickly comes to understand that there are always going to be cycles. The same is true of students and observers of investment markets. There are all kinds of different cycles yet we have found the hypothesis of investment seasons to represent a vitally significant cycle relating to strategic thinking and capital markets. Since asset management falls directly in the middle of the wealth management process we find this observation critical to successful long term wealth management

With the observation of seasons we are able to define and explain events and circumstances that seem unexplainable without this concept. Our proprietary research and our observations over the years have shown us that a failure to understand the effects of the "investment season" is the cause for a substantial degree of misunderstanding of financial and investment relationships. However, it is the recognition of the potential for the migration of capital from one asset class to another as seasons change and evolve that provides an insight into the capital markets that is just not available without this simple concept.

An investment season is defined by the concurrent analysis of both the direction of the inflation trend line and the magnitude of inflation on an absolute basis.

The last four identifiable seasons since have been:

The decade of the 1940's was omitted due to the effects of WWII. Any reference to a normalized financial would not be meaningful for the period. Just as we make the observation that there is no such thing as an average rate of return for investment markets the recognition and understanding of investment seasons provides a functional format to disarm the concepts of economic averages in a multitude of financial concepts and observations.

We include the link to the Investment Seasons Table (above) so you can visually associate investment seasons with the six primary asset classes. This enables a visual understanding for the potential of asset migration. We have observed that the migration of capital from various asset classes can play a critical role in whether we should/can expect above or below average rates of returns for associated assets classes. Other fundamental factors should always be considered as part of this analysis process.

what can we do for you?