How many more hits can U.S. consumers absorb?

We are of the opinion that the U.S. economy will not enter into a recession over the next twelve months or so. For the most part, none of our long-term or short-term macro recessionary indicators suggest any sign of an impending recession. However, we are becoming uncomfortable with the conundrum that appears to be confronting the Federal Reserve (Fed). Can the Fed aggressively raise interest rates to slow the pace of inflation in an environment in which anecdotal evidence suggests that consumers and businesses are showing signs of strain? Given our long-standing view that current inflationary pressures are largely driven by factors out of the control of the Fed (e.g., war, supply chain disruptions, weather, etc.), we believe the Fed should not raise interest rates as much as the market has been expecting. More important, the anecdotal evidence that major retailers have shared during their earnings calls over the last few weeks highlight some growing signs of stress. The Fed should take note, as these are real-time insights into the most important driver of the U.S. economy – the consumer.

The Fed crusade to fight inflation

The Fed remains focused on inflation. Just this week, Fed Chair Jerome Powell hardened the stance that the Fed “won’t hesitate” to increase interest rates until prices start to normalize and financial conditions are in an appropriate place even if “that involves moving past broadly understood levels of neutral.” As a result, the market’s expectations for a front-loaded tightening cycle are now even more skewed to 2022. In fact, the futures market anticipates an additional 200 basis points of tightening this year, and only one rate hike in 2023. That means that by year end, the fed funds rate will be approaching 3% – the largest annual increase in interest rates since 1994. While the Fed has only hiked interest rates two times this year – increasing the fed funds rate by 0.75% – it has already started to make investors nervous as it appears to be dampening some economic activity. Historically, the impact of interest rates hikes lags by at least six months. Yes, inflation is still near the highest level since the 1980s, but steadily increasing interest rates cannot solely resolve pricing pressures that are out of the Fed’s control. For example, energy prices are driven by the ongoing war in Ukraine and supply chain disruptions stem from COVID lockdowns in some of China’s largest cities.

The U.S. consumer has been buoyed by strong wage gains (the highest in 40 years) and healthy job creation (over two million jobs have been created already over the first four months of the year), and these are the primary reasons a recession can be avoided. Remember, there are roughly 11.5 million jobs that still need to be filled. But there are limits to the resiliency of the consumer as numerous negative forces continue to simultaneously build.

Housing: Mortgage rates have increased ~1.90% year-to-date and are nearly at the highest level since 2009. As a result, mortgage applications declined to the lowest levels since May 2020 (down 28% from the recent peak) and the traffic of the prospective buyers sub-index within the NAHB Housing Market Index declined for four of the last five months to the lowest level since June 2020. 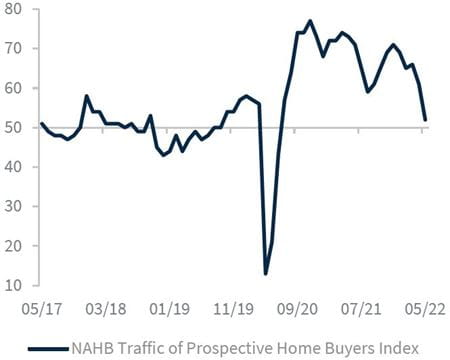 Record gasoline prices: Gasoline prices are at a record high ($4.59/gallon), and now exceed the $4 per gallon threshold in all states. They could temporarily move higher as we enter the summer driving season when families take vacation.

Falling net worth: $8.4 trillion in wealth has been wiped out as the equity and fixed income markets suffered their worst starts to a year since 1940 and 1976, respectively. Feeling less wealthy usually tightens consumers' purse strings. 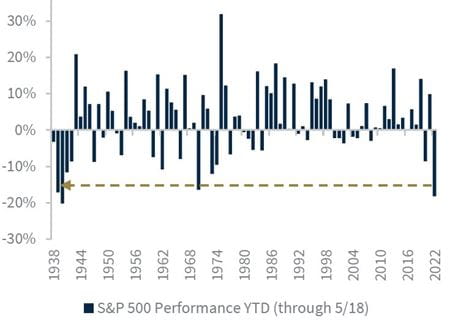 Dwindling savings: The impact of the pandemic-related fiscal stimulus has dwindled as the personal savings rate is about half of what it was at this point last year. In addition, consumers have resorted to credit cards for purchases. Credit card debt is up $88 billion in the last six months – the highest on record and seven times the historical average.

Weakening confidence: One of the most underappreciated dynamics the Fed needs to monitor is the confidence of businesses, consumers, and investors. When it weakens, spooked consumers and businesses pull back spending and this leads to a self-prophesizing recession. Currently, the Conference Board measure of CEO sentiment shows that 57% of respondents expect the economy to sustain a short, mild recession, consumer sentiment is at the lowest level since 2011, and the percentage of bullish investors remains at nearly the lowest level on record. Confidence can be fickle and change quickly; but, the longer it stays weak, the more it could potentially weigh on growth.

This earnings season for retailers provides some early warning signs to the Fed to proceed cautiously when raising interest rates. Below are a few trends and cautionary comments management teams conveyed during their earnings calls. 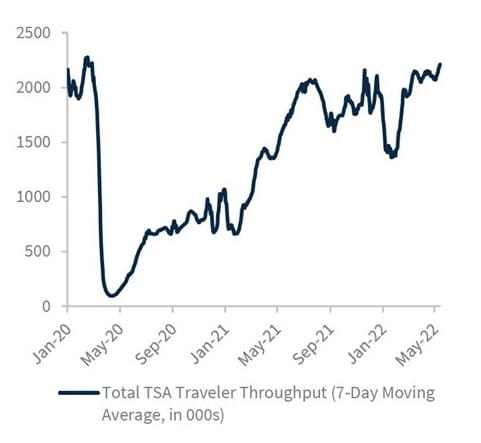 The economy and the equity market

We caution the Fed against aggressively hiking during what seems to be an already slowing (but not contracting) economy. If the Fed hopes to achieve a soft landing as it did in 1994, it will likely have to pivot its rhetoric and not raise interest rates as aggressively as the market anticipates. Our expectation is that the fed funds rate will increase to around 2% to 2.5%. If 1994 serves as the example of what may happen if a soft landing is achieved, the S&P 500 was up more than 20% in each of the proceeding five years, and the Bloomberg Aggregate Bond Index rallied 45% over that same time period.

While we do not believe those gains will be repeated, if the Fed is successful in delivering a soft landing (our base case), the equity market should recover its losses and move higher by year end. However, if a recession were to occur, it is important to decipher whether it will be mild to moderate (an economic decline of less than 2.5%) or severe (a decline of 2.5%+ in GDP). Given the overall health of consumer and corporate balance sheets and the lack of excesses (e.g., overleverage in the housing market leading to the 2008 recession), we believe if a recession occurs, it will be mild/moderate. This distinction is important: a severe recession typically corresponds to an equity market decline of ~34% on average, while a mild/moderate recession experiences an equity market decline of ~24% on average – a difference of 10%. This suggests that even if we are in the midst of a mild/moderate recession, the equity market (S&P 500 down ~20%) has already priced in ~84% of the decline from a historical basis.

One other point that is worth noting is that the stock market is not the economy. While spending on services accounts for ~60% of total consumer spending, it makes up a far smaller weighting in the S&P 500. In fact, the consumer discretionary, staples and industrial companies oriented toward service-related spending (e.g., online travel booking, cruises, airlines, etc.) make up ~2% of the index, while goods-related spending (e.g., grocery, big-box retailers) make up 15%. This illustrates why negative headlines from the goods-related companies have overshadowed the more positive headlines of service-related companies in weighing on the near-term performance of the S&P 500.

Bottom line: A slowdown is not a contraction

According to our Chief Economist, Eugenio Alemán, a recession is still not our base case. While a 50-basis point hike is fully priced into the market at both the June and July meetings, we are hopeful that the Fed will shift to a more dovish, patient stance at the Jackson Hole Symposium (August 25) as inflationary pressures ease in the months ahead. In addition, we advocate for the Fed to be less aggressive in tightening even if inflation remains elevated (and beyond the Fed’s control), rather than aggressively hiking into a slowing economy and causing harm to a labor market that has still not recovered all of the jobs lost during the pandemic-induced downturn. The Fed should take note of the messages that retailers have sent over the last several weeks. Next week should provide additional insights from retailers as we get earnings from Best Buy (consumer electronics) and other discounters (Dollar Tree, Dollar General and Costco.)

Ultimately, a less aggressive Fed would provide a more favorable backdrop for the economy and financial markets for the next 12 months.

All expressions of opinion are those of Investment Strategy and does not reflect the judgment of Raymond James and are subject to change. Information contained in this report was received from sources believed to be reliable, but accuracy is not guaranteed. Past performance is not indicative of future results. There is no assurance any of the trends mentioned will continue or that any of the forecasts mentioned will occur. Economic and market conditions are subject to change. Investing involves risks including the possible loss of capital. The Standard & Poor’s 500 Index (S&P 500) is an index of 500 stocks issued by 500 large companies with market capitalizations of at least $6.1 billion. It is not possible to invest directly in an index. Material is provided for informational purposes only and does not constitute a recommendation. The information has been obtained from sources considered to be reliable, but we do not guarantee that the foregoing material is accurate or complete. The Bloomberg US Aggregate Bond Index is a broad base, market capitalization-weighted bond market index representing intermediate-term investment grade bonds traded in the United States. Diversification does not guarantee a profit nor protects against a loss. Fixed-income securities (or “bonds”) are exposed to various risks including but not limited to credit (risk of default or principal and interest payments), market and liquidity, interest rate, reinvestment, legislative (changes to the tax code), and call risks. There is an inverse relationship between interest rate movements and fixed income prices. Generally, when interest rates rise, fixed income prices fall and when interest rates fall, fixed income prices generally rise. U.S. Treasury securities are guaranteed by the U.S. government and, if held to maturity, generally offer a fixed rate of return and guaranteed principal value.