Ever since Zach Buchanan started covering the Diamondbacks for “The Athletic” I have been a subscriber. I pay an average of $5/month for great sports journalism. There are no ads and no “clickbait”; the site is incredibly clean and easy to read. The writing is wonderful…if you miss the sports pages of old or “Sports Illustrated” magazine the way it used to be before the internet, you will love reading “The Athletic”. Zach Buchanan does a tremendous job covering my favorite baseball team, and every now and then he writes an interesting story about something out of the ordinary.

(The following is excerpted with permission from “The Athletic’s” Zach Buchanan’s 11/26/19 article “Win Your Day! How one baseball writer accidentally became a personal-development guru”)

The email hits your inbox every weekday morning and it always starts with a quote.

Perhaps you’ll hear from Harry Potter author J.K. Rowling or Olympic skier Lindsey Vonn. Maybe the words will belong to an older voice: Groucho Marx or Benjamin Disraeli, the Greek philosopher Epictetus or the Buddha himself. It’s always someone notable, an endless Murderer’s Row of the wise, famous and successful. But you don’t read the email for those people.

You’re here for what comes next, and it’s not much, at least quantitatively. A few sentences or a few paragraphs. It could be a reminder to not work yourself to death, or a musing about how change can be a good thing if you choose to view it that way. Sometimes it’s a challenge to take 10 minutes every night to reflect on the good things that happened that day. And at the end, the same charge: “Win Your Day!”

Almost 1,800 people receive this email, and they’re hoping to hear these words. Many are regular folks in need of the daily encouragement, but several are notable figures in their own right. Cardinals star Paul Goldschmidt is a subscriber, as is former Pirates manager Clint Hurdle. Several others around baseball including Nationals outfielder Adam Eaton and Padres catcher Austin Hedges receive it, too. So does best-selling author Jon Gordon, who authors a similar, weekly email that boasts 145,000 recipients. All of them check their inboxes every morning to hear from Steve Gilbert.

But Gilbert is no professional life coach. Unlike the luminaries he quotes, he’s relatively anonymous. He is a baseball writer who covers the Diamondbacks for MLB.com. Six years ago, he sent his first email to a list of 33 friends, hoping to brighten their day. Now, strangers send him thankful messages for the positivity he puts in their lives. Ballplayers ask him to lunch in order to talk through the grind of a long and frustrating season. Sales and marketing executives invite him to speak to their employees.

Gilbert, 50, is surprised so many people find his thoughts useful. Even though his email would be pointless if it didn’t help people, he’s still getting used to the fact that it does. This type of influence was never his goal. He’s become a guru by accident.

“It’s weird, they see my name in an email and they expect it to be somebody different,” Gilbert says. “I’ll get an email from somebody going, ‘I know you probably get so many emails that you have a whole staff to take care of this, but …’ No, it’s just me sitting at my desk in the morning with a cup of coffee going, ‘What am I going to say today?’”

It all began with a 2013 Facebook post where Gilbert put the concept to his friends. If anyone wanted a positive message, they could add their name to his list. His first round of sign-ups comprised 33 people. At the time, that seemed like a horde.

Agent and former pitcher Mike Milchin was added to the list by a client — then-Diamondbacks outfielder Cody Ross called him to say he’d signed him up for some “great stuff.” Milchin quickly became a devoted Win-Your-Dayer and has pulled similar subscribe-first-ask-later moves on others he thinks could use the daily pick-me-up. Goldschmidt was an early adopter after having formed a close relationship with Gilbert his first couple years in the majors, and he also has passed it along to teammates and friends. Hedges, whose introduction to Win Your Day remains a mystery to Gilbert, evangelized it to Padres outfielder Travis Jankowski. Now, Jankowski and Gilbert try to get lunch whenever the Diamondbacks and Padres play.

Perhaps because baseball players are confronted with so much failure, they all found something they could take from the brief words of encouragement they found in their inbox every morning. “It’s a hard game, man,” Milchin says. “A lot of negative stuff. A lot of failure. The more that we can work on our perception, the better chance we actually have to be successful.” And Gilbert knows all about fighting negativity.

“All this stuff that I write about, I’m talking to myself,” he says. “I’m talking to myself every morning in a lot of ways. Maybe there are gurus out there who have all these answers, but that’s never going to be me. This whole thing for me is the equivalent of being a hitting coach who struggled to hit. The only reason I was able to have any knowledge of it is because I had to work at it and work at it and work at it.”

There are reasons for Gilbert to turn this into some sort of business.

One is that while the Win Your Day email is free to receive, it is hardly free to produce. Beyond the hours Gilbert puts into it, all in his spare time, his list eventually grew so large that he kept running into spam filters. He now uses an email service that costs him about $35 a month, a cost he’s happy to foot in order to help people in his small way. (A side benefit is he no longer has to deal with the awkwardness of someone asking off the list. Signing up or opting out is all done automatically now, though Gilbert has learned to be at peace with losing readers: “If I’ve made growth as a person over the years, that’s one of the ways.”)

But a bigger motivator might be that Gilbert has proved to be pretty good at this. Mark Watts first encountered Win Your Day on Hurdle’s email list. As the sales executive with Comcast, he instantly saw the value of Gilbert’s short, positive messages for his salesforce. “All day long, you deal with rejection,” Watts said. “You feel like you’re a failure and you feel like what you do doesn’t make a difference.” He began forwarding Gilbert’s emails to his team. Tony Hirschtritt, a sales and marketing executive with Sunovion Pharmaceuticals and also one of Gilbert’s childhood friends, did the same. Both have asked Gilbert to speak to their employees.

Watts and Hirschtritt find that Gilbert has a natural way of connecting with people as a speaker. He’s an everyman, which sets Gilbert apart from his motivational speaker peers. The calls he’s done with Watts’ workforce have also been done by the likes of football broadcaster Ron Jaworski and former NFL coach Brian Billick. Hirschtritt’s company was once addressed by astronaut and current senate candidate Mark Kelly, who was accompanied by his wife, former congresswoman and gunshot survivor Gabby Giffords. That’s a hard act to follow, but that was Gilbert’s task when he spoke to Hirschtritt’s management team later that day. “And let me tell you,” Hirschtritt said of Gilbert’s talk, “that was even more motivating.”

If Gilbert wanted to do this for a living — or make some sort of money off of it — he could. “If he wants to do more, he just has to say, ‘Hey, I’m available for talks,’” says Gordon, who turned his own mailing list into a career as an author and speaker. But so far, Gilbert has resisted crossing that Rubicon. The phrase “Win Your Day” remains uncopyrighted. He’s put it on a hat, but it’s a hat for himself. Even selling some sort of merchandise — pens, a daily calendar — to recoup his mailing service costs seems like a bridge too far.

“I don’t do it for anything other than when somebody writes back and says, ‘Hey, this meant something. This helped,’” he says. That’s why Goldschmidt calls Gilbert “so selfless.” Speaking to businesses may be an exciting route to explore, but “that’s not why he’s done it,” Goldschmidt says. “He just wants to affect people in a positive way.”

That’s not to say Gilbert is closed off to all possibilities. He’s always been careful to never write a Win Your Day email when he’s on company time at the ballpark, but he admits the idea of a second career — as an author? Speaker? Mental skills coach? — has crossed his mind. But that would be a big leap and a scary one, a fact that he balances against the satisfaction he has in the job he’s been doing the past two decades. An old Win Your Day email might counsel him to not fear failure, but another would tell him to not worry so much about the next thing that he takes his professional and personal happiness for granted.

You don’t win your day by fretting about tomorrow, after all.

I personally LOVE getting these emails…they are short, concise and to the point and contain a wonderful message. I encourage all to sign up! Try a free 7-day trial to “The Athletic” as well! 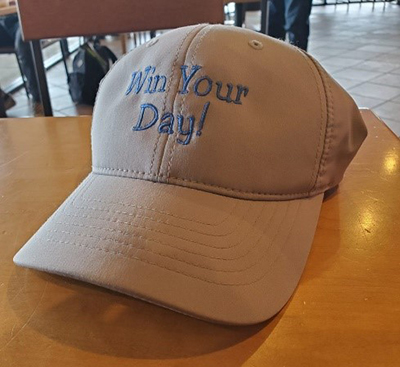