The Adventures of Rosco and Stella

Those of you who know my wife, Debbie, know that she is quite possibly the nicest human on the planet. She would do anything for anyone in need. We are living through an interesting experience due to her overwhelming generosity.

We have a 10-year old labradoodle named Maggie who weighs 40 pounds. We got her from a breeder when she was four months old and other than a couple of minor misfortunate events as a puppy, she has been a wonderful member of our family. She is very healthy and most are surprised to learn she is 10 when they meet her (she is quite youthfully energetic).

When the stay-at-home orders were first enforced in Arizona, unbeknownst to me, Debbie posted on a Facebook group page called Arizona Labradoodles/Goldendoodles that we might be open to fostering any dogs for people who needed help during this difficult time.

A nice woman from Sierra Vista (south of Tucson) reached out to her (after vetting her FB profile and deciding that Debbie seemed very nice) and told her that she had two 8-year old goldendoodle siblings and she can use help. We arranged for her to drive up with the dogs on the following Saturday to see if they were compatible with Maggie and if this was a good fit. She stayed for an hour, everyone seemed to be getting along and we decided that we would give it a try. Rosco and Stella are big-time love bugs…all they want is to be petted and loved.

The first couple of days and nights were interesting. I’m sure most of you will not be surprised to hear that there is a lot of “structure” at our house. Maggie doesn’t climb on furniture and doesn’t go upstairs where the kids’ rooms are. Rosco (60 pounds) and Stella (50 pounds) think they are lap dogs and were quick to jump up on couches and beds…and they had no issue with stairs and explored upstairs at every opportunity before we could catch them and teach them that was not allowed. Maggie also walks with a gentle leader which prevents her from pulling at all when on a leash. Since I have been working from home (3/27 was last day in the office), I have walked her every day at the end of my “workday”…it is my way of decompressing that I usually was able to do on my drive home. Rosco and Stella were unfamiliar with gentle leaders—their family members rarely took them on walks because they couldn’t handle them on their leashes. At night (3 AM) they wanted to play or wander around or jump on our bed. On day three, Debbie and I (and all the kids) were out of the house for a couple of hours in the evening (I had to run a work-related errand and they were doing a drive-by for our nephew’s birthday). All three dogs were calm and behaving (laying on the floor in our room) and we decided to leave them alone and let them have the run of the house as Maggie does when we leave. It turns out that this was not a good decision at all.

I arrived home first. I was on the phone with my parents as I walked in to the house and I said goodbye as abruptly as I ever have…if you are experienced at talking to my father on the phone you understand that this is no easy task. The first thing I noticed was there seemed to be little feathers EVERYWHERE. All three dogs were barking and running around like they were prisoners during a riot. Debbie’s favorite throw pillow was shredded on top of our bed (that explained the feathers). There was an inexpensive pair of destroyed house slippers next to Debbie’s side of our bed. The rest of the family came home shortly after and we all were able to laugh and began the clean-up…we still found a few random feathers over the next few days in odd places all over the house. That night was difficult again as 3 AM playtime was in effect. We decided to try crates and purchased them the next day.

It turns out that Rosco and Stella used to spend a lot of time in their crates at their permanent home but since their owner had been experiencing a difficult time, she had “eased up on using them” and they mostly slept on her bed with her. Once the crates were set up they eagerly got into them and got very comfortable…laying in them during the day with the doors open. That night everybody slept through the night and we were extremely happy!

Maggie and Stella got into a few “spats” over the next few days. Maggie was acting a bit territorial (she was accustomed to being the only “princess” in our home) and Stella thinks that every bone/toy/ball should be hers and no one else’s. One of the spats got a bit violent and we were wondering if this was going to work. Several days later (we are two weeks in by now), they had another violent altercation and we started looking for alternate foster families. We found several “suspects” but no real “prospects” over the next several days and we did our best to not let Stella and Maggie get into any more spats.

It has been several weeks since Debbie posted that we were looking for alternate accommodations and we have experienced no further issues. Rosco and Maggie seem to really be bonding…Rosco sleeps on the floor right next to Maggie (he gets liberty from his crate) and all stay calm and quiet through the night. The three of them are playing better together…with much supervision which is definitely the key. I am unable to provide help during the workday but Debbie and Abrie do a great job. We purchased gentle leaders for both Rosco and Stella and they get better every day on our walks.

Rosco and Stella’s permanent owner might one day want them back…this is a very open-ended commitment. When Debbie was asked recently if this was a loan or was it permanent, she replied, “It’s a loanament!” We will see how things go…but we have stopped actively looking for other foster families. But if any of you really want them, you can let me know and I will file it away if we have any more issues. They really are great dogs and despite the setbacks, I’m glad we are doing this…my wife continues to amaze!

I hope everyone is staying healthy and safe! 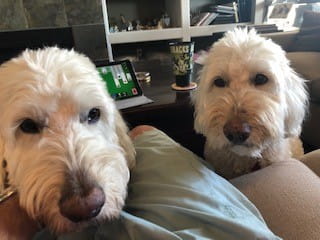 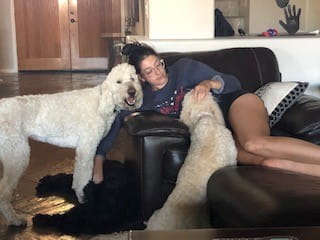 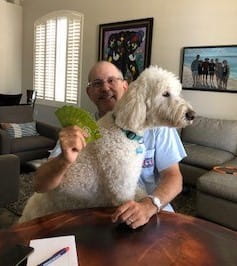 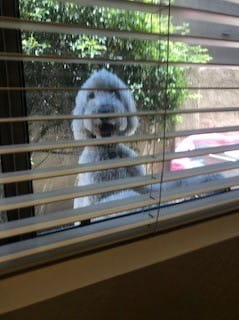 Rosco found my workspace while outside 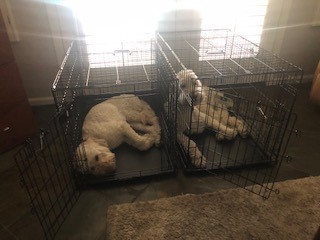 They love their houses 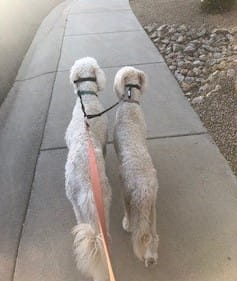 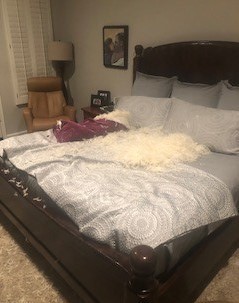