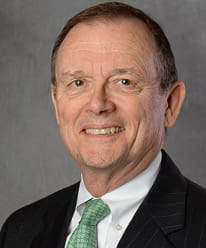 Jerry received his BBA degree with an emphasis in finance and marketing. After a 20 year career as the founder and owner of a group of men and women's clothing stores, he began his investment career in 1990 as a financial planner with the Oklahoma City office of Eppler, Guerin and Turner, a regional investment banking firm.

In addition to his securities licenses, Jerry is also licensed in life insurance as well as fixed and variable annuities. His primary responsibilities are analyzing and designing clients' long term wealth management strategies. He is also the author of several articles concerning asset preservation and is considered a knowledgeable resource in both qualified and non-qualified retirement plans and deferred compensation strategies.

Jerry is a graduate of the Buckley School of Public Speaking in Camden, South Carolina and conducts seminars and workshops on wealth management through risk-averse planning. He is on the adjunct teaching faculties of the Oklahoma Society of CPA's and the Oklahoma Bar Center.

He and his wife, Abby, have 4 grown children and are active in their local church. They have served on several church boards and other community organizations. Jerry mentored for 11 years in the Stanley Hupfeld Academy at Western Village, a grade school in Oklahoma City.