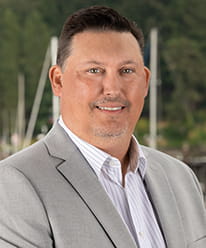 Scott’s journey to where he is today is loaded with fateful twists. The Bushes were originally from Southern Cal and moved to Gig Harbor when Scott was a teen. He graduated from Peninsula High School. He then took classes at Tacoma Community College, before earning a BA in Communications from Washington State University in 1993.

After several years of working in radio and promotion, Scott was offered a job with Warner Bros records in Los Angeles. Before making his potentially life-changing decision, he consulted with his father on the financial business that he had built from scratch with Howard Polen.

That was in 1996, and Scott hasn’t left the office since. Now with 20 years under his belt, Scott has built a solid reputation creating financial stability for his clients. Scott and his wife Jennifer are longtime community volunteers with Rotary and PTA. They have three sons together. The family enjoys all things outdoors and Seahawks football. Oh, and of course… GO COUGS!