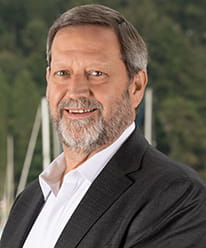 Son of founding partner Howard Polen, Tim began life at the office as an administrative assistant in 2000. By 2005 he had acquired multiple securities licenses and began handling client accounts. Before being a trusted advisor, Tim ran a carpet cleaning business, something his dad couldn’t see his son doing for the rest of his life.

“Dad and I talked about what I’d like to do, if and when I left the carpet cleaning business behind. He said I’d be good at working with people and their finances, since I was able to solve their problems. I decided to take a leap and start working from the bottom.”

“It took a while to get going and I went through some struggles. Most memorably, going through the crash of 2000 within my first four months of being in the industry. There were many rough times, but I gained knowledge and resilience. I wouldn’t want to be doing anything else.”

Tim is an avid golfer and member of the Gig Harbor Men’s League. He and his wife Laurie are the proud parents of 4 and grandparents of 2. Laurie, a former Puyallup small business owner, is currently enjoying spending her time doing volunteer work and doting on their grandchildren. Together they enjoy Seahawks & WSU Cougar football games, boating on the Puget Sound and spending quality time with family.