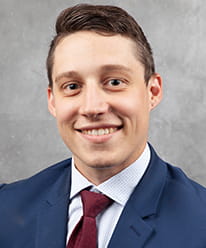 Matt joined the financial services team of Raymond James in 2020 after starting his financial career in banking.

Matt is a Stark County native who graduated from Louisville High School in 2010. Upon graduation, Matt served our country in the United States Air Force. After his time in the military, Matt went on to attend The Ohio State University, where he obtained his bachelor’s degree in 2017.

In his free time, Matt enjoys the outdoors, sports, and spending time with his wife, Courtney, and their Golden Retriever, Cali.

Matt and his family currently reside in Jackson Township.