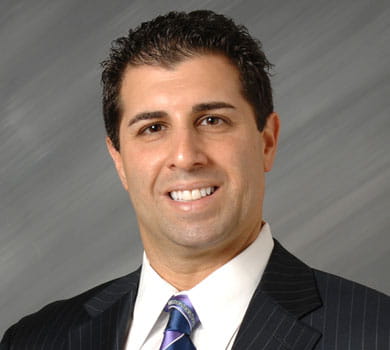 Elliot Weissmark brings a wealth of financial experience to Raymond James that was gained by working for more than two decades in the financial services industry. He began his career in 1996 with Salomon Brothers Smith Barney and moved to a predecessor firm of Wells Fargo Advisors in 2005. He not only earned the CERTIFIED FINANCIAL PLANNER™ certification, but has used this knowledge to teach CFP® certification classes at Nova Southeastern University. He also holds the designations of CERTIFIED PLAN FIDUCIARY ADVISOR (CPFA).

Elliot spent his youth in New York City and moved to South Florida at the age of 13, living in Broward County since 2003. He earned his bachelor’s degree in economics and accounting and received his master’s degree in business. He was named a Certified Commercial Real Estate Appraiser where he appraised properties for the RTC (Resolution Trust Corporation) during the savings and loan crisis in the early 1990s. He is dedicated to his charitable work with Deliver The Dream as well as volunteering with the American Cancer Society.

He and his wife, Shari, have two adult children. In his spare time, Elliot indulges in his passion for fine wines and has been designated a wine sommelier by the Court of Master Sommeliers. Elliot also enjoys golfing and fly fishing at the family’s vacation home in North Carolina, which provides for the perfect environment.

A fitness junkie, Elliot has spent many years weight lifting, spinning, kick boxing, circuit training and holds a black belt in Krav Maga. Known for its focus on real-world situations, Krav Maga is an extremely efficient self-defense system developed for the Israel Defence Forces (IDF) that consists of a wide combination of techniques sourced from aikido, judo, boxing and wrestling, along with realistic fight training. Playing pickelball is one of Elliot’s newest addictions.