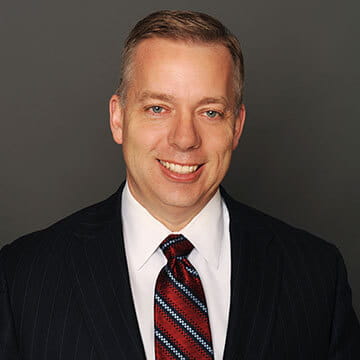 After 25 years in the financial services industry, Eric knows just how important it is for people to have a sound financial plan in place. After all, it was during those years that the economy and the markets saw some unprecedented challenges and changes through which Eric was able to guide and direct his clients. Ultimately, his goal is to help clients feel confident no matter what is happening in the world, the economy or the markets, knowing they are working with a team of professionals dedicated to their financial well-being.

In 1989, Eric began his career right out of college with a bachelor’s degree in economics he earned from DePauw University, Greencastle, Indiana. Before joining Raymond James in 2006, Eric worked for Edward Jones and NatCity Investments. His decision to join Raymond James was due, in large part, to the ability he gained to run his own business in a way that enabled him to foster close relationships with clients and to serve their best interests. Eric currently holds seven professional licenses, reflecting his in-depth knowledge and expertise in the field of securities and investments. He is also a Certified Financial Planner™ professional, a certification that required him to complete the arduous CFP® certification process, requires him to meet ongoing certification renewal requirements, and holds him to rigorous ethical standards.

Eric is originally from Princeton, Indiana. Today he lives in Louisville with his wife, Stefanie, and the couple’s three children. Outside the office, Eric is active in his church, Southeast Christian, where he is involved with the men’s ministry. He also stays busy coaching youth soccer and basketball teams. Elsewhere in the community, you’ll find Eric serving on the board of the Louisville chapter of the American Red Cross. In the past, he has served on the boards of Reitz Home Preservation Society, Rotary International and Louisville Public Radio.