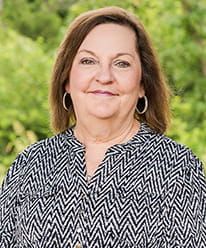 A native of the Midwest, Debbie grew up in Hutchinson, KS. She began her career in the financial services industry in 2001. She is a registered sales assistant having obtained her Series 7 and Series 66 in 2006. Debbie also holds a Kansas Insurance license. She joined the team at S.J. Prill Financial & Investment Planning, Inc. in April 2016.

Debbie and her husband “Kelly” have two grown children; daughter, Dawn and son, Allan and eight wonderful grandchildren (Brittany, Logan, Callie, Jeff, Christina, Sierra, Cage & Garrett). In March of 2018, they were also blessed with a great-granddaughter, Aralin.  Debbie and Kelly are avid motorcycle enthusiasts and love to spend time together touring the country. They are members of Westside Baptist Church in Hutchinson.  Debbie’s greatest joy is spending time with family and friends, especially any activity that involves her grandkids.