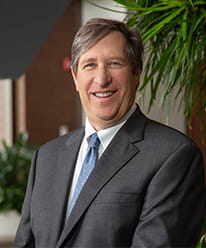 A financial advisor since 1984, John works tirelessly for his clients. “I do everything possible to please my clients,” John said. “As an investment industry veteran, I know that exceptional client service drives great outcomes and results. I strive for perfection with the goal of excellence, and I am happiest when my clients are happy.”

John joined Raymond James in 2018, 34 years after he began his career with Dean Witter. From there, John went on to work for Rauscher Pierce, then opened a second A.G. Edwards office in Austin, Texas, in May of 1990. In 2006, John expanded his practice to include his hometown of Victoria, Texas, where his father, Robert “Bob” Martin, would later join his practice.

“Dad and I worked together until his retirement in 2013,” John said. “On a personal note, this was the most rewarding time in my career – being able to work alongside my father.”

Through a series of acquisitions, A.G. Edwards became Wells Fargo Advisors, where John worked until making the move to Raymond James. His titles over the years include associate vice president, senior vice president and managing director of investments.

Traveling weekly between Austin and Victoria, John serves as his team’s mentor, the big-picture thinker, an excellent communicator and a student of the stock market.

Empathetic, trustworthy and genuine, John is known for his financial generosity. He supports charities such as the Alzheimer’s Association, Partnership for Children (Austin), The Victoria Bach Festival, The American Book Review, David’s Legacy Foundation, which combats cyberbullying, the University of Houston-Victoria and The Austin Parks Foundation, to name a few.

John studied economics at the University of Texas at Austin, just like his father. A proud member of the Kappa Sigma fraternity, John served as an officer, active member and trustee. He received the Frank C. Erwin Outstanding Young Alumni Award and was named the National Alumni Advisor of the year.

In his time away from the office, John is an avid golfer, having taken up the game as a 9-year-old. He also enjoys playing Texas hold ’em and is a member of Spanish Oaks Golf Club and Victoria Country Club.

“Time spent with my parents is my favorite pastime and something I cherish greatly,” John said.

Raymond James is not affiliated with any of the organizations listed above.