About Us Leadership Team Tash Elwyn 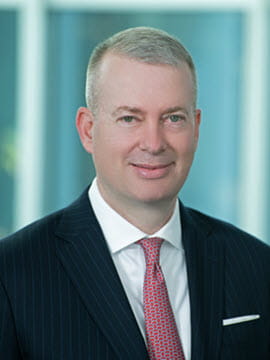 Named president & CEO of RJA in 2018 and serving as RJA PCG president since 2012, Elwyn also was divisional director, senior vice president of the Atlantic Division of RJA for five years. Elwyn began his career at Raymond James in 1993 as a financial advisor trainee out of college. After building a successful practice, he became an assistant branch manager in Atlanta and subsequently a branch manager in Chattanooga.

A graduate of Emory University, Elwyn has continued to be active with the school throughout his career. He serves on the Emory College of Arts & Science Dean’s Advisory Council, and has served on the Emory Board of Governors, the Emory College Alumni Board and the Alumni Admissions Network, and as a mentor in the Emory Career Network. He is also an alumnus of the Securities Industry Institute.

A native of Boston, Elwyn grew up in Stone Mountain, Georgia, and today lives in St. Petersburg, Florida, with his wife and two children. He is active locally as the director for the Metro Tampa Bay Board of the American Heart Association, as well as in the University of South Florida Corporate Mentor Program, the St. Petersburg Area Chamber of Commerce and the Pinellas Education Foundation.