We spoke with Shannon about Pride, his career journey and inclusion at the firm – and the importance of allyship and creating safe spaces to be yourself at work.

Shannon Tucker is the divisional compliance officer for the Southern Division of Raymond James & Associates. Shannon began working in public relations and speech-writing roles after graduating from the University of Mississippi. He started his financial services career in 2004 supporting anti-money laundering (AML) at First Tennessee Bank (now First Horizon Bank). He eventually joined Morgan Keegan, where he began as an AML surveillance analyst and later became director of the firm’s surveillance department. 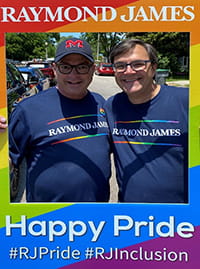 Shannon and his husband, Eric, live in Memphis.

Do you feel empowered to bring your authentic self to work? Was there a time when you didn’t?I’ve been out since I was 22 years old, and I’m fortunate that I haven’t had a ton of negative experiences with being myself in a professional setting. I do remember when I told my boss at another organization that I accepted a job at Morgan Keegan, she was a bit concerned I might not feel I could be myself there. What I learned after starting, however, is that I didn’t know how to be anything other than myself. I felt accepted at Morgan Keegan, but there were certainly bumps along the way.

How did you get involved with the Pride Inclusion Network?

In 2012, when I joined Raymond James through the acquisition of Morgan Keegan, one of the first things I learned about was the “Rainbow Network,” which was the name of the Pride Inclusion Network at the time. I told my friends, “I’m going to be the king of the Rainbow Network someday!”

There wasn’t a ton of Pride-specific activity then, especially in Memphis. And while there was a lot of corporate support for the Rainbow Network, it didn’t yet have the full corporate structure it has today. But just a few years later, our firm’s Associate Inclusion Networks became what they are now. The Pride Inclusion Network went through a restructuring as part of that process, and I’m so grateful I was at the right place at the right time to help create some of that. 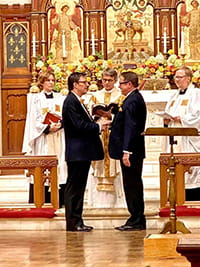 What DEI-related progress have you found most significant or has made you the proudest?

I would say when Raymond James joined the Human Rights Campaign (HRC) Business Coalition for the Equality Act. The coalition includes U.S.-based companies that support the Equality Act, federal legislation that would provide the same protections to LGBTQ+ people already provided to other protected groups under federal law. Signing this act not only attests that we are a firm that believes LGBTQ+ people should be protected from discrimination in the workplace but also supports the firm’s vision to be a financial services firm as unique as the people we serve. The Pride Inclusion Network does a great deal to raise awareness and provide support in the workplace, but to get down to the meat of it, the firm’s public support of LGBTQ+ folks is huge. It says this is a safe place for you to work.

I was also extremely proud when Raymond James scored 100 on the Human Rights Campaign Quality Index. We were close to scoring a 100 for many years, but a group of folks led by Tom Hake – who’s the co-founder and national co-chair of the firm’s Pride Financial Advisors Network – championed additional transgender healthcare benefits. Since then, we’ve consistently been named on the HRC’s annual “Best Places to Work for LGBTQ+ Equality” list.

Do you have any networking advice for LGBTQ+ professionals new to the firm?

Start small; start with people you feel comfortable with; start with me! The folks in our Pride Inclusion Network for associates and Pride Financial Advisors Network are wonderful people to connect with. Put some time on the calendar with Pride leaders if you want to start to grow your network and feel more supported.

Let’s talk about allyship. How important is it?

Allyship and advocacy are so important to our work. When you are the only one in your group or department, it can be a struggle to decide how open you want to be. Knowing that you have the support of allies makes a huge difference. What I learned about allyship for myself is that I can be a member of other inclusion networks such as the Women’s Inclusion Network or Mosaic multicultural inclusion network because I’m an ally to those communities. We often think of allyship as more specific to the LGBTQ+ community. So, if anyone is wondering if it’s OK to join a network if they’re not a member of that community – yes, it’s OK! We wouldn’t have all of the programs, events and support we have without allies.

Have you witnessed any difficult conversations that were navigated skillfully at the firm?

When we talk about coming out, it’s important to remember that gay people have to come out every day in their lives. For instance, when I’m talking to someone and they ask a simple question like, “Are you married?” If I answer “Yes,” sometimes they follow with, “What’s her name?” And I say “Actually, his name is Eric …” there’s always a moment when you wonder, “How is this going to go? Will it be OK?” The majority of the time it’s received well, and we can continue talking about our families. At Raymond James, we’re also encouraged to ask about and share our pronouns to help others acknowledge our identities. For example, my email signature includes mine (He/Him/His).