Three signs you may be suited for a career in Technology 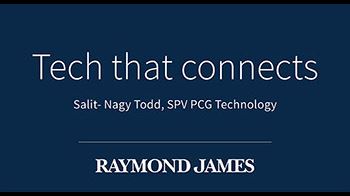 Some people think of their career path as a ladder, others as a jungle gym, but I have always thought of my career path as a spider web. A web is intricate and full of possibilities, working from the outside in with splits and decision points all along the way. That spider web image came to mind again as I hosted a Raymond James Women in Technology panel discussion with three highly respected colleagues. Each followed unique paths to their current role, but one thing they all have in common is that as early professionals they didn’t see themselves working in the technology field, but rather found that their natural strengths led them to it.

Throughout our discussion, MaryShannon Buchanan, Kimberly Tays and Stephanie Motroni shared advice for exploring a role in technology, as well as what it takes to be a leader while navigating the complexities of the pandemic. These are a few of their insights and if you relate, you might be surprised to find that you’re suited for a future in technology as well.

You have interests outside of technical work.

If you asked me 20 years ago, I’d have said I would never work in technology because I didn’t want to sit in a room and code. But there’s so much more available in the field today. Stephanie, senior manager of IT content management, was a marketing and communications professional working for a nonprofit prior to joining Raymond James. She says that in her current position, “I have the opportunity of balancing being in technology in the finance industry, while focusing on creating communications and content.”

In fact, a recent report from the Interactive Advertising Bureau found that the internet-supported economy now accounts for 12% of U.S. gross domestic product, up from 2% in 2008. Those opportunities range from data and content to advertising and media employment. Kimberly, vice president, technology also had a nontechnical path to her role leading product ownership and management over some of the firm’s most utilized technology tools. She started at Raymond James working in the mailroom, then became a corporate trainer to learn more about the industry before ultimately ending up in IT.

You plan for the future while being flexible in the present.

When the pandemic began, technology teams around the world quickly learned whether their systems were prepared for business to be conducted in a fully virtual environment. MaryShannon, senior vice president of technology, shared, “I can’t say enough about our pre-pandemic work prepping for business continuity and thinking about every scenario. In IT you can’t forget to plan for the outside events. Our teams did such a great job preparing that when we went into this it was more verification than testing.”

Though even the best laid plans can’t account for everything, which became clear when supply chain complications made it difficult to provide all associates with the hardware they needed. I remember shifting gears quickly to find hardware, ship it and then help the end user get set up at home. Suddenly I became a call center for technology setup and was more attached to my cell phone than ever before, but I went into problem solving mode to get the job done.

Kimberly described a similar experience. “I often tell people that ‘no job is beneath you’ and what I mean is sometimes you just have to do whatever it takes to get something done. There were a lot of things in this process where I could have said ‘not my job’ but it was a hole that needed to be filled.” She recognized that this was a relatively finite period filled with extra hours and tasks and decided to lead by example.

You have great communication and relationship building skills.

Nontechnical skills might not be the first to come to mind when thinking about a successful IT career, but every leader on the panel agreed: they are essential. Especially when the pandemic started, I found myself paying specific attention to the words I used in emails, as well as overcommunicating even if it felt like I already communicated, to avoid misunderstandings.

Stephanie had just acquired a new group within her team when the pandemic started and found that it was weighing heavy on her to make sure they felt supported. “Everything was urgent but also everything was net new content, so everyone stepped up to help each other learn it in order to communicate to others.”

MaryShannon pointed out that relationship building within her department had to be adjusted to the new environment. While she used to walk around the office to interact with her team, she instead set up group lunch meetings over Zoom to have a casual conversation about how things are going.

The discussion concluded with advice for how to get started. There are, of course, traditional routes like formal education and certifications, but a great first step is to find someone currently working in a role that interests you and learning about their world. Do some homework to come up with specific questions then reach out to your network. MaryShannon also shared that volunteer work can be an asset. An associate on her team was hired based on his experience working on his community church’s website and server, combined with having the right attitude and passion for the job.

Ultimately, I believe there is a role in technology for almost any skillset and interest. My hope is that these insights help reset common misconceptions about what makes a person successful in the field and encourages more individuals to consider a career in technology.