This one’s for Taylor: A story of never giving up 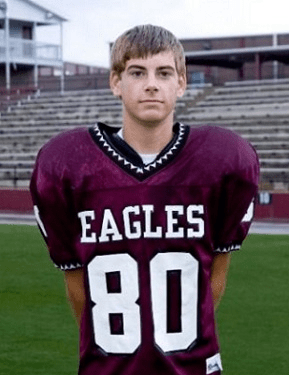 “A motto for me is plain and simple: Don’t quit; never give up.”

Taylor Haugen was a dedicated, natural born leader. A wide receiver on the Niceville High School junior varsity football team, he loved the sport and would often stay after practice and train on weekends to improve his routes and receptions.

Taylor, also known as “T,” lived out his faith and served others on and off the field, all while maintaining a weighted 4.0 GPA despite his extracurricular activities.

Two weeks into his sophomore school year, T was ready to put all his hard work to the test. During the fourth quarter of the team’s scrimmage game, he was tackled by an opponent and suffered a fatal injury to his liver. On August 30, 2008, Taylor passed away from internal bleeding, leaving a gaping hole in the hearts of his parents, teammates and community.

A call to action

Only a few weeks had passed when RJA advisor Brian Haugen and wife Kathy got a call from the school office. Taylor’s friends and classmates had raised money in his memory, and the staff needed guidance on what to do. Brian and Kathy opened their home to the students, and asked them how they wanted to use the funds raised. Their message was loud and clear: “We want to pay tribute to Taylor and prevent others from getting hurt.”

The Haugens knew that if they were going to honor the students’ wishes, it would take time and dedication to support the cause. 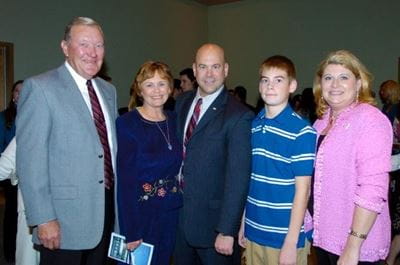 So Brian and Kathy accepted the challenge, and set out to honor Taylor and protect others from the same fate. Alongside close friends, family and community leaders, they created the Taylor Haugen Foundation (THF) and formed a board of directors.

At first the Haugens began awarding a scholarship and trophy in Taylor’s name to student athletes who demonstrated outstanding academics, leadership, community service and faith.

Then in 2011, just two years after Taylor’s passing, THF launched the Youth Equipment for Sports Safety (YESS) program© after hearing of another young player impacted by similar injuries.

The purpose of the YESS program is to educate and equip student athletes with high-tech, protective gear designed to mold to a player’s rib cage – acting as a shield against abdominal injuries.

Student athletes across the globe are victims of blunt trauma in contact sports. In high school football, athletes are commonly required to wear a helmet, shoulder pads, gloves, shoes, thigh and knee pads, and sometimes a mouth guard. Yet there is little protection for the torso – the top-tackled area with the latest targeting rules.

However, student and professional athletes are not required to wear abdominal protection – and that’s where the foundation steps in. The Haugens and THF board members work directly with school administrators through the YESS program, educating them on abdominal safety and collaborating with donors to outfit underserved athletes with the high-tech equipment used in the NFL and NCAA. 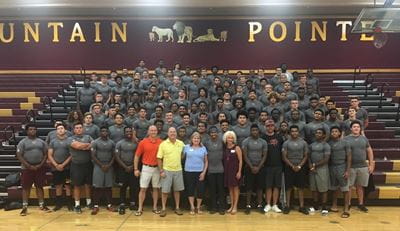 Among partner donors is Cleveland Browns quarterback Drew Stanton, who wears the EvoShield and has worked with THF to outfit two high school football teams, including his alma mater.

“Seeing the looks on the students’ faces when the kids wear the gear is remarkable,” says Brian. “They say it feels like an extra layer of skin – like they’re Superman.”

Since the program’s inception, the YESS program has outfitted over 5,000 student athletes in 75+ middle and high schools across 13 states nationwide.

A legacy worth leaving

Just eight days before Taylor passed, he wrote a timed essay for school. In it he penned: “A motto for me is plain and simple: Don’t quit; never give up.” 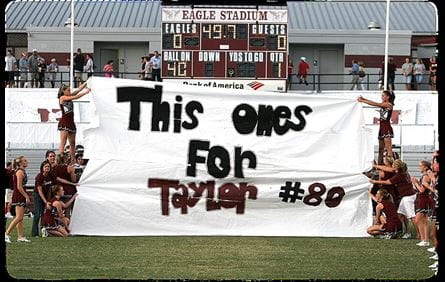 These words continue to inform everything Brian and Kathy Haugen do, and act as the foundation’s motto, too. “We may not be able to outfit every kid in the United States,” says Kathy, “but we can try. We’ll just keep going until we run out of money. That’s when we’ll know it’s time to stop.”

August 30, 2018, marks 10 years since their son’s passing. And every day, T’s legacy lives on through the foundation’s safety programs, trophy and scholarship award.

“Every day is hard, and I still can’t believe it’s been a decade since we’ve had him with us,” said Brian. “But he’s our inspiration. This one’s for Taylor.”

Visit the Taylor Haugen Foundation website to learn how the Haugens are helping to protect student athletes across the nation.

Click here to watch a video about Taylor’s life and legacy, which was featured in 2009 by ESPN and Tom Rinaldi on College Game Day, spotlighting how former University of Florida quarterback Tim Tebow got involved in the cause.