Kim Jenson’s life and career have been testaments to the importance of perspective. 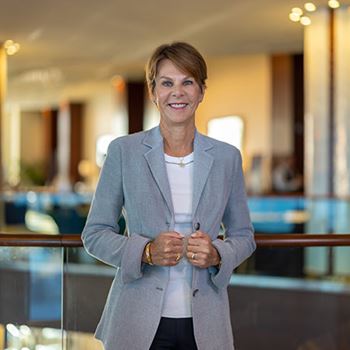 The lodestars of our lives are rarely unfading, our touchstones are rarely unmovable, and our big pictures are not glass-encased masterpieces but eclectic chalkboard sketches. Through them, however, we can find clarity, said Kim Jenson, whose life and career have been shaped by this understanding.

As one might expect of an executive at a firm whose principles are rooted in long-term thinking, Jenson, the chief operating officer and a senior vice president of the Raymond James Private Client Group, is a big believer in the power of goal-oriented decision-making, and a student of how goals can and should change over time.

“Through life, you have to keep the big picture in sight,” she said, “to move things forward, make a difference, bring people together and achieve objectives, that’s really where the power lies. Sometimes the big picture changes, so we have to prioritize and reprioritize.”

As she has advanced her career, this has remained her guide. Like anyone living in a complex, everchanging world, she’s faced moments where she had to decide, among many issues, where to focus her efforts. She’s had to figure out if the battle in front of her was really worth fighting.

“I am constantly asking myself, ‘How does what I am doing right now impact our primary objectives and shared goals?’ If it’s not moving those goals forward, you have to ask yourself what priority it should receive. It’s an approach that works with your career, and the relationships with your family and your friends.”

Still, the answer can be unclear. Sometimes similarly important goals compete for the same finite time. For that, she offered a second litmus test: “Am I getting energy from this?”

It’s another way to figure out whether you are maintaining equilibrium in your life, she added. Work-life balance, as with all things, is hardly static. In the early days of her career, earning a college degree on nights and weekends and raising her young son, she had to remain constantly vigilant about her priorities and where she was allocating time and energy – the experience of many working parents.

“You’re the best judge of whether you need to adjust,” she said. “Your balance changes depending on where you are.”

In 2016, Jenson was asked by the Chicago Business Journal to describe herself in one word. At the time, she was a managing director and complex director for UBS Wealth Management. She was being recognized as one of the publication’s 50 Women of Influence.

“Determined,” she had responded.

We asked her how she came to see that as one of her defining traits. She said she thinks of it as being mission-driven.

“I think that came from raising a child as a single young woman. We didn’t have any room for waste. We had to keep putting one foot in front of the other and growing and learning and problem-solving. I didn’t have time to sweat the small stuff. Luckily for me, it perhaps became a habit,” Jenson said.

“Through life, you have to keep the big picture in sight.”

In 1978, when her son was two, Jenson took her first job in finance as the secretary for the president of a small community bank in her native Minnesota, a man named Mark W. Olson. It was an opportunity when she needed one; she had no idea it would be the launch of a 40-plus-year career.

Within that first year, she was writing real estate appraisals, encoding and filing checks, and handling the myriad affairs that kept the operation and the president’s work running smoothly. But soon, Olson told Jenson it was time for her to move on. In their land of 10,000 lakes, he said she was ready to find a bigger one. He called some associates at Norwest Bank in Minneapolis and made introductions.

“I often think about how unselfish that was,” she said. “I was a really good secretary! I couldn’t believe he wanted to give me up. He was really unselfish in his approach and so encouraging. He helped me see the bigger world.”

“Over the years I found the formula: hard work and understanding the big-picture objectives.”

In time, Olson, too, would expand his world, in a journey that saw him become a member of the U.S. Federal Reserve Board of Governors and then chairman of the Public Company Accounting Oversight Board.

The good kind of terrifying

Jenson’s father, Jimmy Jenson – “the Swingin’ Swede” – was a career musician and entertainer in Minnesota with live performances, a TV show, a Saturday night radio broadcast and a catalog of 12 albums. He gave her some advice about pursuing dreams.

He said, “It’s good to be a little nervous when you take the stage.”

“I always had a little bit of anxiety and anticipation when taking on something new. These are the experiences that keep you confident and make it possible to keep growing.”

Throughout her career, “the most defining moments have been the ones that presented personal and professional risk,” she said. “You’ve probably heard, ‘do something scary every day.’ I applied that to my career. Every time I took a step in my career, getting tapped on the shoulder or pursuing a role I was perhaps unqualified for, it was scary, but that’s where all the fruit was.”

In her 13 years at Norwest Bank, Jenson’s career was on a steady upward trajectory. On nights and weekends, she did college coursework and earned her Bachelor of Science degree in management and marketing from Minnesota State University, Mankato.

After distinguishing herself at Norwest, she was recruited by Piper Jaffray, also of Minneapolis, leading to 15 years with the firm. In 2006, its wealth management division was purchased by UBS, where she worked for an additional 11 years. In 2017, Kim brought her talents and leadership to Raymond James. Each of these transitions was a scary moment, she said, and each has proved to be worth it.

The many types of happiness

“I’ve seen it over and over, the impact that we have – the impact we’ve made in the capital markets, the impact advisors make every day in the lives of their clients and families,” she said. “It’s what continues to drive me, the fact that we make a difference with our clients, for our people and our company, and in the communities where we live.”

While she is happy to share the benefits of a career in finance, she is adamantly nonprescriptive about her life, her career and her journey.

“Taking big risks and moving 10 times is not for everyone,” she said. “For me, it’s been energizing and additive, but that’s not the way everyone is going to create balance.

“As my husband, Tom, says, ‘There are many ways to have a good life. Choose one.’”

She notes that her father supported a family of five as an accordion player. Her mother, Helen, worked with developmentally challenged adults. Jenson’s son, Michael, is a successful owner of a small business that restores classic cars and builds hot rods and is the father to Jenson’s four grandchildren.

But she suspects that for many others – as it has been for her – a career in financial services can be a big part of their good lives.

“It’s a profession where we get to help people realize their hopes and dreams. Obviously, we need to use technical tools and knowledge to do that, but it’s a relationship business. For that, I think women, in particular, are so well-suited for this profession.”

It’s where, at least, she was able to provide for her family while finding fulfillment.

“If you ask me what I really love to do, I really love to weave high-impact opportunities together with people who care about the outcome and bring their skills and strengths to the table – and then celebrating our success together.

“That’s what I love to do, and it starts with the big picture in mind.”