After a personal loss opened her eyes to the value of financial planning, Melissa Keung, WMS, MBA, set out for a career with impact. One well beyond her comfort zone.

Before the age of 16, Keung had never considered a career in finance. 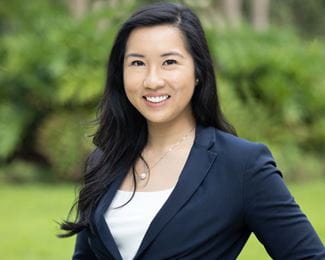 Then she lost her dad.

“Through that, I met our family financial advisor,” she told Aspire. “I saw firsthand how important an advisor can be, not only in retirement planning and maximizing your balance sheet but also in a time of tragedy.”

Despite recognizing the value of advising, Keung, like many women, didn’t see that career path as part of her plans and instead opted for a degree in public health.

However, “I realized I didn’t have the stomach for the medical field or an interest in infectious diseases after I graduated. So, I pursued my MBA at the University of South Florida (USF) while working as the university’s international alumni officer.

“I was contemplating whether to continue down the path of fundraising or start a new career in finance when one of my professors said, ‘You should really consider financial advising.’”

A career in finance was the perfect opportunity to draw from her experience with her family advisor and to harness her entrepreneurial spirit.

Keung describes it as a full-circle moment.

While in her MBA program at USF, Keung was spurred by another professor to enter a stock-pitch competition, which was judged by equity research directors from Raymond James. She formed a two-person team with another female student, making them the only women competing.

“That was really outside of my comfort zone – I had just learned what alpha and beta were,” Keung said. “But I did it anyway.”

Her risk paid off. She and her teammate placed second out of eight teams.

The experience reinforced what Keung considers the overarching theme of her career: to continuously push herself outside of the comfort zone. It also marked her introduction to Raymond James.

“Raymond James kept coming up whenever I talked to advisors. Not only because of the culture, but because as an advisor, this is one of the best firms to be at.”

She had been eyeing the firm’s Advisor Mastery Program (AMP) for at least a year when she saw a LinkedIn post discussing a new offering called the Wealth Management Associate Program.

The latter focused on financial planning and client-discovery skills. It allowed candidates to work with successful, high-profile advisory teams and learn about their work firsthand while also playing a role in helping them integrate planning software and other technology into their practices.

“The Wealth Management Associate Program was a perfect opportunity to get acquainted with Raymond James. Plus, it was a two-year program, which provided a longer runway for me to figure out what I like and don’t like – because there are so many different ways to be successful as an advisor.”

Through the lens of exploration

Keung officially joined Raymond James in January 2020 as part of the Wealth Management Associate Program. By March, COVID-19 had transformed the world.

Suddenly part of a fully remote program, Keung spent the next few months immersing herself in the field of finance while working with 13 advisors across three different branches. She applied her training to help them with everything from Zoom etiquette to financial planning best practices. She also found creative ways to expand her leadership among colleagues.

“Raymond James kept coming up whenever I talked to advisors. Not only because of the culture, but because as an advisor, this is one of the best firms to be at.”

“I had ‘Minute with Melissa’ moments in our branch meetings. Whether advisors had technology or product-related questions, that was my opportunity to be front and center with the branch so they wouldn’t see me as an intern or someone in an administrative role, because that’s not what the Wealth Management Associate Program was about.”

The program allowed Keung to establish her own role and responsibilities within each branch, giving her a taste of the freedom most advisors enjoy when structuring their days. It also allowed her to contemplate the type of advisor she wanted to be.

“If you jump into the business and you’re trying to build from day one, it can be very easy to have tunnel vision because your compensation depends on it,” she said.

“Next thing you know, you have a book of business that isn’t reflective of who you are or the type of advisor you want to be. Instead, the program gave me a lens of exploration and time to figure out what I wanted.”

Armed with the lessons she learned in her training program, Keung continued her financial advising journey by accepting a financial advisor role with one of the teams she was working with – Executive Consulting of Raymond James in St. Petersburg, Florida – in May 2021.

She also joined the program that first caught her eye years ago: AMP.

AMP, which has since incorporated the Wealth Management Associate Program into its own curriculum, focuses on developing the client-facing skills, habits and processes crucial to launching a successful advisory practice. Participants choose between a stand-alone track, where aspiring advisors work on their own to build a business, and the team track, where they aim to add value to established teams.

Staying true to her stance on the comfort zone, Keung has savored the challenge of AMP.

While Keung was planning to go solo after completing the Wealth Management Associate Program, she believes being on a team has provided opportunities she wouldn’t have had otherwise. These have ranged from getting exposure to ultra-high-net-worth clients – a rare feat for emerging advisors – to practicing various pitches with her team and receiving real-time feedback.

“I sometimes pursue the path of most resistance,” Keung admitted.

“Sometimes that’s helpful because I learn and grow a lot. But sometimes there’s a smarter way to go about things. While I had every intention to go solo, I quickly realized that joining the right team would expedite my growth and development as a financial advisor, which has proved true.”

So when Keung realized the expectations she had set for her personal life didn’t align with her professional plans, she pivoted.

“I got married in November 2019, right before I joined Raymond James. And I saw myself being this wife who cooked my husband dinners and was, not necessarily a housewife, but just more present.

“I quickly had to shift that expectation of myself. I started asking my husband to do more things around the house because I either had a client call or a networking event or exams to study for.

“Thankfully, my husband’s amazing, and we have a true partnership. But for me personally, it was a difficult shift in the expectations I had for myself.”

Keung’s struggle is well-known to working women around the globe.

“There’s an expression that says to fail fast. If you’re early in your career, this is the time to make the most of your growth and development.”

Still, Keung, who hopes to one day become a mom, counts family among her top priorities. That was one of the reasons she joined her current team, which mostly consists of dads and embraces a “family first” mentality.

When it comes to cultivating a successful career, Keung remains a staunch advocate of abandoning your comfort zone.

That ambitious courage is what emboldened her to walk away from the medical field when she realized it wasn’t right for her. It’s what inspired her to enter the USF stock-pitch competition despite her fear of failing, and it’s what eventually led her to AMP.

It’s what drives her to seek out challenges that fuel her motivation and broaden her horizons.

“There’s an expression that says to fail fast,” she said. “If you’re early in your career, this is the time to make the most of your growth and development.

“Even if you feel like you’re not ready, or you feel that you’re unqualified, just push yourself outside of your comfort zone and keep doing the things that scare you – because that’s where true growth happens.”