The journey of a lifetime

Being part of the LGBT+ community hasn’t just defined Josh Charles’ personal life, it also inspired his career in finance. 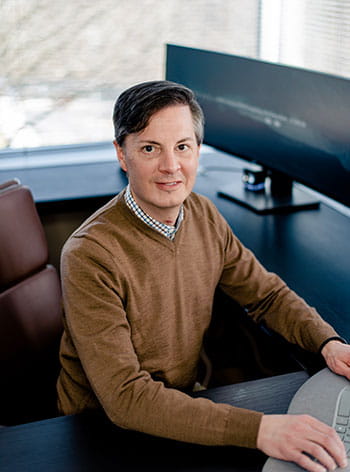 After graduating from Florida State University with an industrial psychology degree, Josh was ready to make a difference.

“I had this vision of going into the workforce and finding ways to bring people together so that they would want to be part of a team and create something amazing,” he said. “But when I graduated college, I couldn’t find the type of job I was looking for. So I went to work for a health insurance company.”

At the time, Josh was in a serious relationship with his then-partner. They had been meeting with an array of estate planners and accountants, trying to get documents that could provide them a semblance of the security married couples enjoyed. Keep in mind this was in the late ’90s, so same-sex marriage wouldn’t be legal for over a decade.

But after accepting a role with a top advisor at Raymond James, Josh realized his estate planning efforts up to that point had proved fruitless.

“I was earning my CFP® certification and going through all of the planning my partner and I had done. That’s when I started recognizing that it was all words on paper. Our planning had meant nothing.”

“I’ve got 27 letters after my name,” Josh said, referring to his eight designations – CFP®, ChFC®, CLU®, ADPA®, CEP®, CLTC, WMS and AIF®. “That was just me going out and trying to learn all these different silos of investment, estate and education planning so I could figure out how to get the protections and guidance that the LGBT+ community wasn’t getting.”

The experience also set the foundation for what would become Josh’s practice, Financial 360.

In 1999, Josh changed gears by accepting a role with an insurance-based financial planning firm. The experience allowed him to form a team of administrative staff he trusted. When he had the opportunity to return to Raymond James in 2005 and work for another top advisor, he brought his team along.

“Confidentiality was key,” Josh said of offering LGBT+ planning services during that time. “I was working with a lot of C-suite individuals, including government workers and contractors who couldn’t be openly out because they could legally lose their jobs. They couldn’t even have a joint account with their partner because that gets reported. And that could send up a red flag that could make them lose their employment.”

Many of Josh’s clients were dual income partners with no children, a fact that allowed Josh to “very quickly develop a thriving practice,” all through word of mouth.

By 2013, Josh was ready to fully embrace his entrepreneurial aspirations at Raymond James by founding Financial 360, his current practice located in Rockville, Maryland. Now, he’s able to offer others the services he needed and couldn’t receive years ago. In some ways, he’s paying it forward.

“Many of the things we specialized in – being able to navigate through different laws and regulations – put us in a place where we could actually do a lot more sophisticated planning with investments, risk management items, estate or tax.

“As a result of that, all of our LGBT+ clients started referring all of their straight friends, if you excuse the vernacular, so our practice is a good 50/50 mix between LGBT+ clients and heterosexual clients.”

At the forefront of progress

Josh is proud to have cultivated his career at a firm that he’s considered an ally from the beginning. One that continues to promote equality from the top down through initiatives like the Advisor Inclusion Networks.

“Back when the LGBT+ population had a negative stigma, Raymond James was one of the first firms that asked me to do an educational session at one of their national conferences,” Josh said, recounting his days as a CFP Board ambassador, a position that saw him visit countless states to educate CFP® professionals, attorneys, accountants and others in similar roles on serving LGBT+ clients.

“What I was trying to convey was: You have all of these people with a lot of money to invest. But they’re an overlooked population. If you can get past your biases, there are a lot of people who can benefit. Trillions of dollars are spent every year by the LGBT+ population. So the more you avoid serving our community, the more you miss out on an opportunity. And they need help!”

Josh believes much of the stigma he encountered in those early days has now faded, inspiring communities like the advisors in the Pride Financial Advisors Network and allowing more LGBT+ clients to get the service they need. It’s also been a relief to see laws change accordingly.

“Planning is easier now than what it used to be. Same-sex couples have the choice to get married because that opportunity now exists. Some people don’t for religious reasons or cultural reasons or family reasons. Or even outside of the LGBT+ community, you have a variety of baby boomers that might be divorced or widowed and want to cohabitate for companionship, but might not want to commingle their assets. So the planning is still needed to help navigate those challenges if you decide you don’t want those protections under the law.

“That wasn’t an option even 10 years ago. So a lot of the challenges we had upfront are getting better.”

Words to live by

In addition to running Financial 360, Josh is on the Advisory Council for the Pride Financial Advisors Network.

“The community that we’ve grown and developed in such a short time is remarkable,” he said, emphasizing the importance of cultivating a sense of belonging, both for members of the LGBT+ communities as well as allies.

“Get involved with whatever community – whether it’s something like the advisor network, a church, another organization – and start building your network and getting your foundation,” he advised people who are hesitant to bring their authentic selves to work.

“My hope would be that, over time, you’ll have a support system that’s going to help empower you, lift you up and get you to a place where you can feel like you can be who you really are.”