It was in founding the Pride Financial Advisors Network that Thomas J. Hake, M.Fin., discovered something else within himself – a renewed sense of purpose and empowerment. 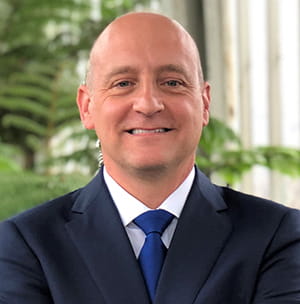 Five years ago, Thomas J. Hake, M.Fin – or “Tom” to those who know him – could have never predicted where he is today.

“For so many years, when I was struggling with the weight of my sexuality and not feeling comfortable in my environment, I wasn’t happy. And people could see it.”

But Tom’s come a long way from where he was.

He moved to Florida, took up a more active lifestyle and, oh yeah, founded a thriving advisor inclusion network at Raymond James. The result? A life more fulfilling than he could have imagined, far-reaching industry recognition, including being named InvestmentNews’ “See It, Be It Role Model” in 2019 and, most recently, an honoree of the Tampa Bay Business Journal’s 2021 Business of Pride.

Looking back on all that’s changed, one thing is clear: It was by founding the Raymond James Pride Financial Advisors Network (PFAN) that Tom unearthed a transformative sense of purpose.

PLANTING THE SEEDS FOR A NEW NETWORK

PFAN grew from a seed planted during a chance encounter at Tom’s first Raymond James national conference in 2017. At that point, Tom had been with Raymond James for a couple of years, and he was determined to find ways to align with other gay advisors. So he summoned the courage to raise the idea with David Patchen, senior vice president of the firm’s PCG Education & Practice Management.

“I hitched a ride from Orlando to St. Pete with David. I was kind of terrified, thinking, ‘I have to come out to him before I could pitch the idea of the network.’” And I was nervous that if it didn’t go well, we were still stuck in his car for another hour or so.

“But it did go well and I’ll never forget when he dropped me off and said, ‘You’re loved and respected for who you are here. You are safe with us.’”

Despite David’s heartening response, the lack of a self-identification platform at Raymond James limited Tom’s quest to find other LGBT+ members and allies. But he refused to let that stand in his way. Instead, Tom did what any ambitious entrepreneur would do – he set out to build the community he envisioned from the ground up.

“I learned as much as I could about what it means to start and lead a business resource group for a Fortune 500 company.”

What followed were countless months devoted to working on a plan for his network, attending a wide range of LGBT+ conferences by organizations like Out & Equal, the Human Rights Campaign and Equality Florida, all while serving as president and financial advisor of his own practice, Hake Investment Group.

“I had to learn a lot. I didn’t know anything about starting a new network. But I also realized that when I went back to Raymond James, I’d be the right person to teach, help and align people to the cause.” Tom’s hard work paid off when in 2018 he flew to Florida, from his hometown, St. Louis, to meet with Jodi Perry, who had recently become president of the firm’s Independent Contractor Division (ICD), Tom’s business channel.

“I talked to her about my idea and she said, ‘I love it. I’m going to get you in front of senior leadership.’”

CEMENTING THE PILLARS OF PFAN

In a matter of months, Tom found himself leading a one-hour presentation on the benefits of creating the advisor network in front of Raymond James executives, including Private Client Group President Scott Curtis and President and CEO of Raymond James & Associates Tash Elwyn.

Tom explained what he considered the three pillars of the new network: to create a collaborative and safe place for the firm’s LGBT+ advisors to come together and align; to support all Raymond James advisors as they strive to meet the distinct needs of LGBT+ clients and their allies; and to serve as a voice of inclusivity for the firm.

“By the end, Tash shook my hand and said, ‘Looks like you hit a grand slam,’” Tom said. “And I kind of knew he was right. Then Scott Curtis said he’d be our executive sponsor and Marta Shen agreed to be my co-chair. We were off and running!”

“I am so empowered to go out there and be me. Raymond James embraces that.”

Spearheaded by Renée Baker, AIN cemented the firm’s commitment to pave the way for meaningful societal change, further promoting PFAN in the process.

A SURGE OF SUCCESS AND SUPPORT

Since its official debut in June 2020, PFAN has experienced a surge of success and support from within and outside the firm. In fact, Tom recalls an instance when Jodi Perry was turned away at the network’s kickoff cocktail party because so many people crashed the party that the venue had no capacity to spare.

“We felt terrible, but it was a sign of success that I just never envisioned. When we saw Jodi after that, she said, ‘If it meant that an advisor got in there and heard your message, that’s more important than me attending.’”

In June 2021, the network reached yet another milestone by hosting its inaugural Business of Pride Symposium. And despite having to postpone plans for the original event – which coincided with the 2020 St. Pete Pride festivities – due to COVID-19, PFAN was able to celebrate its symposium in 2021.

Keeping sight of his overarching mission, Tom hopes the success of PFAN inspires a stronger sense of empowerment and advocacy in others, just as it has in him.

I am so empowered to go out there and be me. Raymond James embraces that.

“I’m making up for lost time. There’s so much going on and so much opportunity. And PFAN is taking up a lot of my time now, but that’s OK. Because after all those years when my parents didn’t want to know about my boyfriend, or when I felt like I couldn’t come out, I’ve finally started to see a different world emerge. Now I just need to offer the same to other people.”

It’s that concept that drove Tom to lead conversations on – and eventually help approve – transgender-inclusive medical benefits at Raymond James, enabling the firm to achieve a perfect score of 100 on the Human Rights Campaign Foundation’s 2020 Corporate Equality Index.

His dedication to creating the type of world he wants to see has also influenced Tom’s approach to business.

“One of the things we do at my practice is always put a woman’s name before her husband’s. It’s a very small gesture, but the world doesn’t do that. I don’t tell them I’m doing it, and when people catch it, they notice, and remember.

“We’re putting them first because there have been plenty of times in the past when they weren’t first. And it’s time for them to be there. I want to empower my clients to realize that we think about things like that, and that we want our industry to be more inclusive and considerate.”

Tom’s efforts have paid off in more ways than one – he estimates that 80% of assets at his practice are owned or controlled by a woman.

The path to becoming a prominent advocate hasn’t been an easy one for Tom. He’s had to overcome twists, turns and detours along the way.

Growing up in St. Louis, Tom spent 18 years in Catholic school. “My family is so Catholic my parents are named Mary and Joseph.” He attended Saint Louis University and earned a Bachelor of Science in business administration with a concentration in finance, a decision partly inspired by his father, who opened his own mutual fund sales office the same year Tom was born.

After college, Tom worked full time in the IT accounting department of a regional bank for seven years, two of which he spent completing his Master of Finance. He then joined his dad’s business before accepting a role at a Midwestern boutique firm. This would mark one of the first times his sexuality affected his career.

“They didn’t treat me very well there. When I finally brought somebody who was important in my life to a conference, that’s when I felt things started to go downhill. So, I left.” After a short time at a large wirehouse, Tom finally found his home at Raymond James in 2015.

It’s easier to stay in the status quo. But we need to move the needle. We need to choose courage over comfort.

Now a firm leader in diversity and inclusion initiatives with branches in Florida and St. Louis, Tom is committed to being the advocate he would have wanted to have.

“I want to make an impact. I want to share our stories, so that we can hopefully inspire others to be empowered.

“They may not know it, but everybody has someone who needs to hear their story. And they’re challenging stories. But then we say, ‘We have a place for you where you can find other allies, or other members of the community, who know what you’ve been through. And in fact, not only are we going to offer you resources for financial planning, but we’ll connect you to organizations like The Trevor Project and PFLAG.’”

In addition to extending his support and mentorship, Tom is proud to provide education on vital issues affecting the LGBT+ community, such as the fact that 27 U.S. states can legally discriminate against lesbian, gay and transgender people, denying them employment, housing and public accommodations based on their sexual orientation alone.

I want to make an impact. I want to share our stories, so that we can hopefully inspire others to be empowered.

“It’s not always easy,” he said of his advocacy work. “It’s easier to stay in the status quo. But we need to move the needle. We need to choose courage over comfort.”

As for supporting the movement, Tom emphasizes the power of visibility.

“It never hurts to put a little pride flag somewhere in your office because you’re letting people around you know you’re somebody with whom they can connect. In my early days here, I would walk through the halls and if I saw a pride flag on somebody’s desk, I’d just go talk to them.

“It’s so simple, but we have to be more visible to protect and nurture each other. And displaying your Raymond James pride flag is a great way to offer that invitation to anyone in our community.”