An interview with Lynne Henning

Lynne Henning was 6 when her father, who ran grocery stores, taught her to make change for customers. In her 10th grade business class, she recalls being the only one excited about balancing a check book. 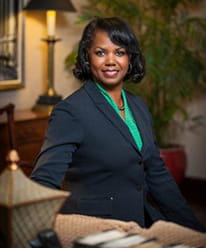 She has always been intrigued by money.

After many years in banking, including managing a main office for several years in her hometown of Jackson, Tennessee, someone she trusted asked her to be his partner at Morgan Keegan – to be a financial advisor. And though Lynne would never question that every step in her life has its purpose, she does wish she’d found her way to being a financial advisor earlier.

20 years later, she is still too often the only Black financial advisor in the room. After Raymond James acquired Morgan Keegan, Lynne became a member of the Women’s Financial Advisor Network and was encouraged by the formation of the Black Financial Advisors Network (BFAN) a few years later. As a member of the BFAN Advisory Council, she is determined to see more people of color enter the financial services industry.

How did you come to a career as a financial advisor?

My father ran a couple of community grocery stores, and I was always underfoot. I knew I wanted to pursue a career working with money, but I didn’t know what direction it would lead me. I spent many years in banking. My first job out of college was at Norwest, where I met the person who is now my partner, Jonathan Campbell. I was his boss and he told me he didn’t plan to be there long because he wanted to be a financial advisor. Years later, I was managing the main office of a bank in Jackson when he asked me to come work with him as a partner in 2001. I did the training and passed all my tests. It was a difficult time because the markets were in a downturn after 9/11, but I persevered and I look up and it’s 20 years later. I’ve enjoyed every moment of it.

What challenges did you face?

I had to hustle and get out there and find business, just like everybody else does. I had to meet people and network and let them know who I was, even though I had built relationships with people in banking. There were people who didn’t want to talk to me because of my color. Unfortunately, we live in an environment where that still exists. I move on to the next thing. It’s more their loss than it is mine. I don’t seek to change anyone’s mind or perception of me. I’m 63. That might have been the case earlier in my career, but not at this stage. I’m very secure in who I am.

Having somebody I know can be a sounding board that will understand where I’m coming from, not just as a woman, but as a Black person. It’s so valuable to have those relationships.

How often were you the only Black person in the room?

That was the case my whole career until the Black Financial Advisors Network. And there are still too few people of color in this industry – not just at Raymond James, but as a whole. I believe only 1% to 2% of the advisor population is people of color. I was the only Black officer at the bank. I was the only Black manager. Sadly, 40 years later, it’s still that way to some extent. Thankfully, Raymond James is making an effort to try and shed some light on that.

What can we do to bring more people of color and more women of color into financial services?

Whatever efforts were taken with the Women Financial Advisors Network, it’s the same. The women’s network has been around for more than 25 years. We didn’t have a women’s network at Morgan Keegan, so it’s a tremendous resource. Now, we need to have the same efforts with people of color. We need to have a presence at the HBCUs, the historically Black colleges and universities. Our industry is kind of a phantom for people of color – they don’t think of it as a career choice. Even with Jonathan insisting and even though I was an investor, I was still hesitant at first to go from a salaried position to commission. But I’m sure glad I did. Every opportunity I have to speak to young people about considering being a financial advisor, I take it.

What makes being an advisor a great choice for you?

I love working with people. I love the opportunity to help people see their goals come to fruition. I love having a relationship with someone where they will entrust their children’s finances and future investment goals with you. It’s a source of pride to say I’m a financial advisor. I wish I was 20 years younger and I could work 20 more years. But I know that my time is winding down before too very long. Maybe.

What role does BFAN play in your work life?

I’m on the Advisory Council, and that has been rewarding to know I have been a part of helping to set standards for the firm in coming up with ideas that promote Black financial advisors. It’s valuable having a community of people who can relate to situations and maybe the problems I’ve experienced. Having somebody I know can be a sounding board that will understand where I’m coming from, not just as a woman, but as a Black person. It’s so valuable to have those relationships.

What is the relationship between increasing the number of Black financial advisors and creating wealth in the Black community?

Both of those go hand in hand. My father, who is 92 years old, was always a CD-buying, bank-account saver. He never invested a single dollar in the stock market until I came to work here. One, he didn’t know anyone. Two, he didn’t know anyone he could trust to invest his money. When you have people who look like you and come from where you come from, it’s easier. I had a new client recently who said, “I’m so glad my aunt referred me to you. I can look you in the eye and you’re not using language I don’t understand.” I want to help people participate in that wealth building system we call the investing world.

You have eight grandchildren – can we assume they understand the value of investing?

Oh, yes. Anytime we talk about money, it always leads to investing. With my daughters, who are 40 and 42 now, it was always about making sure they paid their bills on time to make sure they had good credit. They understood that good credit could take them a long way, make it possible to buy houses and cars. They’ve both done extremely well and now they are both investors, as well. With my grandchildren, who are ages 3 to 20, I talk to them about investing every opportunity I get. The two oldest have accounts and I buy them stocks for their birthdays and for Christmas. They still spend their money on things that I don’t think are necessarily the best things to spend money on, but at least they got started. They can’t say they don’t know about investing – and I’m trying to help them see the power of investing.

This piece was featured in BFAN Connection, a biannual newsletter from the Black Financial Advisors Network. View the latest.