Advisor Solitaire Dasher-Smiley has always been committed to excellence and it’s served her well as she’s navigated life and grown her career at Raymond James.

After many years in banking, including managing a main office, Solitaire Dasher-Smiley can recount many occasions when she was the only woman of color or person of color in the room. Like in elementary school when she was often the only Black girl in her class. Or in eighth grade at a private school where the principal said there wasn’t a spot for her in the advanced algebra class – because she was on partial scholarship. And now, when at a recent conference that brought together 300 local advisors, she was the only Black woman in attendance. 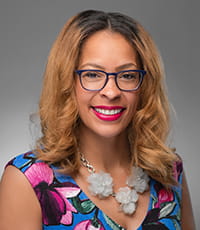 That’s why her involvement in BFAN is important to her. It’s one of the ways she fights for a seat at the table – and makes space for others to sit next to her.

“I’ve always had a pretty strong affinity for math as well as human connection. I like to talk to people. I wouldn’t categorize myself as a shy person,” she laughed. “When I went to college, I majored in finance and international business. My father always said, ‘If you can help people manage their money and their finances, and do it well, you’ll always be in demand.’”

And she got that job, right out of college, at a big-four accounting firm. It fulfilled her desire to work with numbers, but there was a lack of deeper human connection. So, six years later, she found Raymond James and transitioned into the firm as an accountant. But her goal was to learn as much as she could and eventually become a financial advisor.

“I knew I wanted to go that route, to be an advisor. But I also knew I wanted to find an area of the business that would allow me to distinguish myself. When most people think about investments, the first two things they think of are stocks and bonds – traditional investments. I wanted to do something different,” Solitaire said. “I had a chance in my other roles to work with various groups and figure out what I liked and what I disliked. And I stumbled across alternative investments.”

And when an opportunity in the firm’s alternative investments group opened up, Solitaire went for it. It was her chance to get one step closer to her dream.

I don’t always win. But, I never lose … instead, I learn.

“Even though I was an internal candidate, it was still a rigorous and lengthy process. Ultimately, I got the position,” she said. “But, during the first three to six months, I really felt like I was drinking from a fire hose. I had joined a high-performing team. And, in this role, there was so much to learn that I really struggled initially to see how I was adding value.”

Then, after months of studying the fundamentals of alternative investments and the idiosyncrasies of the products she covered, there was a lightbulb moment and it all clicked. One day Solitaire was fielding a call from an advisor and, without hesitation or consultation, she knew the answer. She said, “It just really felt good. Though I knew there was still much to learn, in that moment, I was able to add value to my team, our client (the receiving advisor), the advisor’s client, and, ultimately, Raymond James. And it felt amazing.” 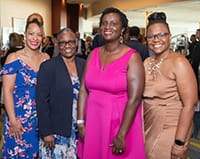 Over the course of seven years, she continued to garner the knowledge, credentials and experience to become an expert in her space and her confidence followed. During that same period, she was able to leverage her expertise to build meaningful relationships with a network of financial advisors around the country. She became the first person many advisors would think of if they had a question regarding hedge funds, private equity or structured investments.

Given the depth and breadth of her unique and complementary skills to many other advisors, it’s no surprise that she was recruited by one of the financial advisor teams with whom she had built a valuable relationship to become a partner with Weiss Wealth Strategies of Raymond James.

The only hitch in Weiss Wealth Strategies’ offer was that Solitaire lived in Tampa, Florida, (near the Raymond James headquarters) and the team, the office and the bulk of their business was in Scottsdale, Arizona. Solitaire said her husband was surprised when she pitched the idea of a crosscountry career move. But nonetheless, they headed west to attend the team’s annual holiday party, meet a many of the local clients, experience the city (since their only prior visit was in 2005 when Jeff, now her husband, proposed), and explore if this was an opportunity they wanted to embrace and pursue.

“Every single thing about the visit exceeded our expectations,” Solitaire said. Everyone in the office was welcoming, and she remembers visiting Gary’s house and noting a big wall of family photos just like the one in her own home and her parents’ home. They went to a hole-in-the-wall Mexican restaurant, and the bartender recognized Gary as his son’s former little league baseball coach. “He knew Gary not because of what he did professionally, but because of how he gave back to the community. That made it feel very genuine and authentic. It just felt right.”

She even convinced her in-laws to move across the country as well. They are retired and couldn’t stay away from Solitaire’s two beautiful babies for too long. “I thought it would be a tough sell and it really wasn’t,” Solitaire said. “They said, ‘We believe in you. We want to support you. And we want to do whatever we can to help you and our grandchildren be successful.’”

Now that Solitaire has realized her dream of becoming a financial advisor, she has that fulfilment found in human connection she was missing at her prior firm and in her other roles.

Get comfortable being uncomfortable. There is no shortage of things to learn. And there are going to be lots of opportunities worth pursuing.

“Being a new advisor, one of the memories that sticks out to me the most is when one of our clients said she really wanted to pay for a full year of college for one of her grandchildren. And she was not sure she was going to be able to do it because it wasn’t originally part of the plan. When we showed her that she was not only able to send her granddaughter to school for one year, but she could actually pay for two years, if she wanted, and it would have no negative impact on her achieving all of her other goals. She began to cry. Then I started to cry. It was one of the most moving experiences I’ve ever had in my career. And, I hope to be blessed with many more opportunities to exceed client expectations.”

To anyone who knows Solitaire, it’s somewhat predictable that she’s achieved what she set out to. Those around her describe her as loyal, determined and committed to excellence. It was ingrained in her at a young age. She always gives everything her best.

“One of my favorite quotes is by Colin Powell. And it goes, ‘If you are going to achieve excellence in big things, you develop the habit in little matters. Excellence is not an exception, it is a prevailing attitude,’” Solitaire said. “And long before I heard that quote, I’ve been living that philosophy. My parents, my childhood friends, my former teachers, they would all attest to that. They never really had to push me to give my best effort. It just came naturally.”

To be clear, Solitaire said that doesn’t mean she’s never failed. It does mean that when she does make a mistake, despite giving it her all, she learns and grows from it. In her words, “I don’t always win. But, I never lose … instead, I learn.”

And that’s exactly the advice she’d give to new advisors starting in the business: “Get comfortable being uncomfortable. There is no shortage of things to learn. And there are going to be lots of opportunities worth pursuing. But, it’s not always easy. It’s going to be uncomfortable and frustrating, but you have to live there for a little while. So, get comfortable with that.”

Another piece of advice she has is to distinguish yourself. After all, it’s how she got the opportunity to transition from associate to advisor. She made a name for herself by growing her expertise and becoming a reliable, qualified and go-to resource for alternative investments and consultant on highnet-worth client cases.

Though I knew there was still much to learn, in that moment, I was able to add value to my team, our client, the advisor’s client, and, ultimately, Raymond James. And it felt amazing.

One of the other ways she’s made a name for herself is through her involvement in BFAN. “I participate in the Black Financial Advisors Network because I believe it is a network that was created with the intent of bringing people of shared experiences and potential hurdles together so they can learn from each other, encourage each other and promote diversity in the industry,” Solitaire says. “The most meaningful part of my participation is in the relationships that I’ve built and the guidance and encouragement that I’ve received. And I intend to pay that forward.”

Solitaire has already started sharing her story and making an impact on college students, having presented at a recent career night for a finance discovery program geared toward engaging more minority students to pursue careers in finance. She feels like participating in these events is important – to be more visible on college campuses and show that being a financial advisor is an attainable career. It’s something she’s committed to being increasingly involved in going forward as well.

Beyond that, she realizes that sometimes you can’t plan for everything. “Despite being a financial planner, there are just simply some things that you can’t or don’t plan for. A great personal example is moving my family across the country,” Solitaire said. “Nonetheless, it provided me with an opportunity. It got me one step closer to pursuing my longerterm goals. So, when I think about what’s next for me, I would to say my plans are to continue to serve our clients, grow our business – and simply have a seat at the table where I belong.”

This piece was featured in BFAN Connection, a biannual newsletter from the Black Financial Advisors Network. View the latest.