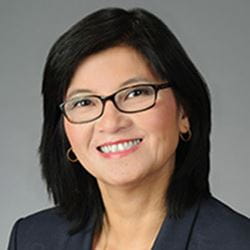 Marta Shen, who you may recognize as a successful advisor and co-chair of PFAN, was not always comfortable with who she was. And it was finding community by answering an ad in a gay newspaper in Atlanta back in 1996 that empowered her to fully embrace her true self.

“When I was a CPA and attorney, I was in the closet. I wasn’t comfortable with who I was; I wasn’t out at work,” Marta said. “When I became an advisor, I actually answered an ad in a gay newspaper called Southern Voice in Atlanta that was really looking for advisors to serve the LGBT+ community.”

It was the 1990s, around the time Ellen DeGeneres came out on national TV. And Marta had business partners who were part of the community too. The national firm she worked for at the time really valued diversity – and she felt supported.

It was then that the journey to being a successful financial advisor – who was comfortable in her own skin – began.

Marta says she was raised to be in a profession of caring.

“I had three options when I was growing up: I could be a doctor, a lawyer or an engineer. Being a philosophy major was not one of them,” she joked. “When I actually became a lawyer, I didn’t really like it. There was one side that had to lose while the other one won. I thought, ‘There has to be something where everyone wins.’”

Then, when her parents lost their savings to a scam, she realized one poor financial decision could ruin a life’s worth of hard work. She said her aim in life became to help people make good financial decisions – and make sure everyone won.

When Marta started her practice in Atlanta – she now calls Olympia, Washington, home – almost 80% of her clients were part of the LBGT+ community. She not only advertised directly to the community through the gay chamber of commerce, LGBT+ publications and by serving on local social organization boards, but word of mouth traveled fast that she was someone who understood the challenges gay couples faced before full marriage equality in 2015. She felt she could help by protecting her community’s family; same-sex spouses and their children who didn’t have access to the same benefits as opposite-sex partners.

But as her practice grew, so did her specialties.

“I’m thankful to be able to focus on clients who can see the value in the analysis and guidance we provide with the science part of what we do, such as tax planning, real estate investment analysis and investment planning, but also with the art part of changing financial behaviors.”

Half of her clients still reside in the Atlanta market, and she travels back there to meet with them regularly. The others are in various states as well as the Pacific Northwest, where she lives with her partner, Carrie, and their two preteen sons.

As Marta quotes author and motivational speaker Brian Tracy, “The price of success must be paid in full and in advance,” she reflects on how she earned success in her career. And it’s through perseverance.

“When people use the term perseverance, it can be applied in many ways. How many times can you fall down and still get up?”

“When people use the term perseverance, it can be applied in many ways,” she explained. “How many times can you fall down and still get up? For me, I didn’t naturally have a market or people with wealth in my family and friends. So there’s a lot of rejection that came in the beginning being a financial advisor. And it boils down to your commitment level. Do you want to do this? What are you willing to do? What type of hard work?”

As a child of immigrant parents who didn’t speak English and learning English herself at age 6, she had to overcome adversity to get to where she is today.

“For others, it’s a different history,” she said. “As a financial advisor, we meet clients where they are. And people come with a lot of history. The uniqueness makes what we do interesting, number one, because we’re problem-solvers, first and foremost. It just so happens that our problem-solving comes attached to money.”

And, as a self-described “problem-solver of money,” knowing a person, their background, their situation and their family is all important for the partnership to work.

While a smaller proportion (35%-40%) of her current clients are LGBT+, she does think it helps that she’s part of the community; they feel comfortable opening up right from the start, from the first conversation.

As for those who are allies to the LGBT+ community, Marta said, “First, I want to say, ‘Thank you.’”

Allies, she said, can make those in the community feel comfortable sharing their whole selves by using pronouns, being curious and showing sensitivity. She encourages allies to go a step further and become advocates and “stand up for us when we are not in the room,” adding, “Sometimes it’s not easy, but it’s what the community needs.”

Just as Marta previously felt supported by her employer when she came out, she wanted to replicate that same community at work that made her feel so welcomed. And this is why she acts as co-chair of PFAN and is on the council for the FPA Pride Planners. She feels it’s important to provide resources to those who serve the community and share best practices. And she wants PFAN to be a voice for the firm and contribute to building diversity and inclusion initiatives into everyday work.

Her advice to advisors just starting their careers or building their businesses is to respect where people came from. History is so important to what financial advisors do that it’s imperative to have an appreciation for your clients’ stories and their comfort levels.

She challenges advisors to be curious not only about the profession – and always be open to learning – but be curious about clients’ lives too. Get to know them and their history and act in a way that serves and honors their stories.